Tottenham will hope to continue their excellent recent form when they take on Liverpool on Tuesday night. Here is the side I think Pochettino will select:

Tottenham Hotspur will hope to continue their excellent recent form when they take on Liverpool at Anfield on Tuesday night. Here is the starting eleven I think Mauricio Pochettino will select:

Goalkeeper: No decision for Pochettino to make here. Hugo Lloris is easily his best option in goal.

Defence: The Argentinean coach is unlikely to tinker too much from the side that beat Arsenal so I expect he’ll resist the temptation to change his back four, meaning Kyle Walker and Danny Rose should start in the full-back positions while Eric Dier may keep Federico Fazio out the side again by starting alongside Jan Vertonghen at the back.

Midfield: Nabil Bentaleb and Ryan Mason were excellent against the Gunners at the weekend so I’d expect they will retain their places in the center of the park and keep the likes of Benjamin Stambouli and Etienne Capoue on the sidelines.

Attack: No doubt Harry Kane will start up front once again as he continued his sensational form with another brace on Saturday. Christian Eriksen is also a cert to start while I think Andros Townsend and Nacer Chadli could come in for Mousa Dembele and Erik Lamela to freshen things up in attack.

Here’s how I think Spurs will line-up against Liverpool: 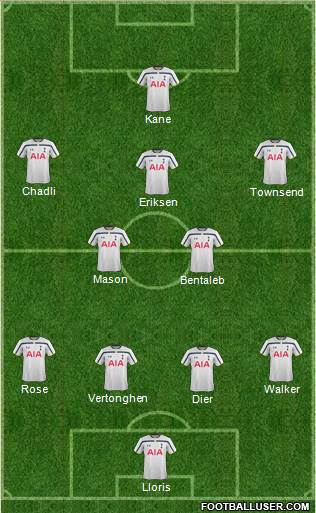