Liverpool boss Brendan Rodgers flew over to Rome to hold formal talks over a potential deal for this €34m-Rated midfielder. Find out more details here

The January transfer window is now closed but that won’t stop the newspapers from speculating ahead of the summer so we’ll bring you all the news and gossip. Today, Liverpool are linked with Miralem Pjanic….. 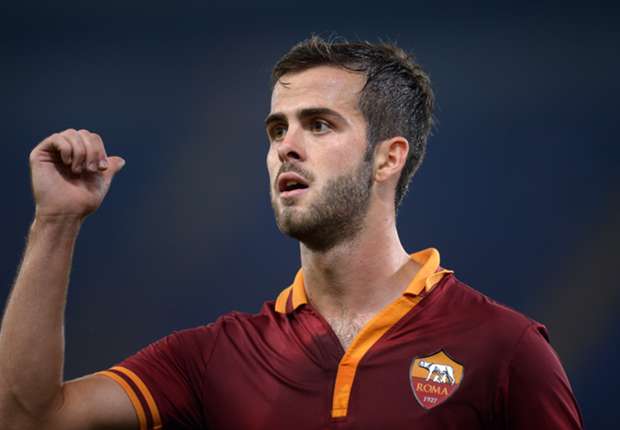 Liverpool manager Brendan Rodgers set tongues wagging this week after he flew out to Europe on Tuesday night for a mystery meeting.

Rodgers headed straight out after the 3-2 win over Tottenham Hotspur at Anfield and speculation has been rife over where he was going and what he was up to.

Rumours intensified after photos emerged of the Reds boss posing for pictures outside the Vatican in Rome and he couldn’t have been going to attend a game on a scouting mission as neither Roma or Lazio were scheduled to play.

The Northern Irishman left Colin Pascoe to handle media duties on Thursday ahead ahead of Saturday’s FA Cup clash with Crystal Palace and the assistant boss confirmed that Rodgers had gone to Europe for a ‘meeting’ but refused to give anything else away.

“He had to get off sharpish after the game for a meeting in Europe,”

“It is a club matter and none of your business.” Pascoe is quoted as saying by the Express

However, according to the Daily Mail, Rodgers was in the Italian capital to hold formal talks over a summer deal for Roma midfielder Miralem Pjanic.

Liverpool have been linked with the Bosnia and Herzegovina international in the past and the newspaper suggests the Merseysiders have now began laying the groundwork over a potential big-money move at the end of the season.

Pjanic has been in superb form for Roma since joining the club from Lyon in 2011 but with Liverpool on the look-out for a replacement for departing captain Steven Gerrard, it seems Rodgers has set his sights on luring the 24-year-old away from Serie A.

Roma are going to be desperate to keep hold of him and reports suggest they will demand a fee in the region of €34m (£25m) for his services, but Pjanic would be an excellent replacement for Gerrard if the Reds were able to get a deal agreed.