Arsenal entertain Middlesbrough at the Emirates Stadium tomorrow. Here’s a preview with team news, line-ups, predicted score and betting tips for the game

Holders Arsenal will continue the defence of the FA Cup when Middlesbrough arrive at the Emirates Stadium on Sunday afternoon.

We head into the game off the back of a hard fought 2-1 win over Leicester City on Tuesday night that got our top four push back on track after last weekends disappointing loss at Tottenham.

However, Arsene Wenger will turn his attention away from league duties and focus on the FA Cup tomorrow, with a tricky clash against an in-form Middlesbrough awaites.

So far, we’ve dispatched of Hull and Brighton with relative ease in previous rounds but Boro are expected to give us a stern test with Aitor Karanka’s men coming into the match unbeaten in 10 games – form that’s seen them march to the top of the Championship table.

Wenger has been calling on the players not to take Middlesbrough lightly tomorrow but we should know that only too well considering they beat Manchester City 2-0 at the Etihad in the fourth round.

With Chelsea, Man City and Spurs all out, the FA Cup is wide open this year and we have an excellent opportunity to retain the trophy is we can book our place in the quarter finals with a win tomorrow.

Arsene is expected to make some changes to his starting eleven and that could see January signing Gabriel Paulista handed his debut at the back.

Wojciech Szczesny is also in-line to return between the sticks having lost his place in recent weeks while the likes of Kieran Gibbs and Calum Chambers could also get recalls.

Aaron Ramsey has been ruled out with a hamstring injury and Alexis Sanchez is also unlikely to feature after picking up a knee knock on Tuesday night.

Jack Wilshere could be back in the squad after returning to full training, but Alex Oxlade-Chamberlain, Mikel Arteta and Mathieu Debuchy all remain unavailable.

As for Boro, they are missing Dani Ayala with the defender out for a month through injury while Adam Forshaw and Tomas Kalas are ineligible. 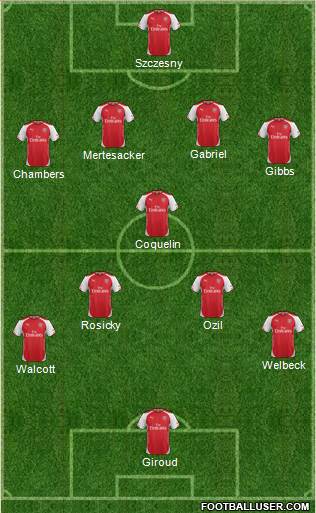 Arsenal 2-0 Middlesbrough: I don’t see this being a formality by any stretch of the imagination but as long as we apply ourselves and put in a professional performance, I think we should have too much for the Championship side to handle in the end.

Arsenal are obviously the heavy favourites to win with the bookies at odds of 4/9 but thanks to Football-talk you can get enhanced odds of 3/1 plus you can win a £100 free bet bundle. If you’d prefer to bet on the exact score line, our 2-0 prediction if on offer at 13/2, and I also fancy Theo Walcott to open the scoring at 5/1. If we combine that with a 2-0 home win then we get very tempting odds of 22/1. Surely that’s got to be worth a couple of quid!?