Liverpool will look to close in on the top four when they take on West Ham at Upton Park on Saturday. Here is the side I think the Jurgen Klopp will pick.

Liverpool will look to close in on the top four when they take on West Ham at Upton Park on Saturday afternoon. Here is the side I think Jurgen Klopp will pick.

Goalkeeper: Simon Mignolet should continue between the sticks this weekend with Adam Bogdan his back-up on the bench.

Defence: Martin Skrtel remains out with a hamstring problem so Klopp is unlikely to make any changes to the back-four that kept a clean sheet during last night’s 1-0 win at Sunderland. Dejan Lovren is therefore set to continue alongside Mamadou Sakho at the back with Alberto Moreno and Nathaniel Clyne keeping their places in the full back slots.

Midfield: Jordan Henderson is a major doubt for the trip to London after being forced off with a heel injury at the Stadium of Light. Lucas Leiva is on stand-by to step-in and start alongside Emre Can in midfield as James Milner remains out with a calf injury.

Attack: Klopp has confirmed that Daniel Sturridge could be back in the squad after recovering from a hamstring injury but I think the Reds will be cautious with the striker so a place on the bench is probably the best he can hope for.

With Divock Origi still nursing a hamstring problem, Christian Benteke will once again lead the line up front and will be looking to build on the winning goals he’s scored in the last two games.

Philippe Coutinho, Roberto Firmino and Adam Lallana could provide the support in attack but Jordon Ibe is waiting in the wings if Klopp wants to freshen things up. 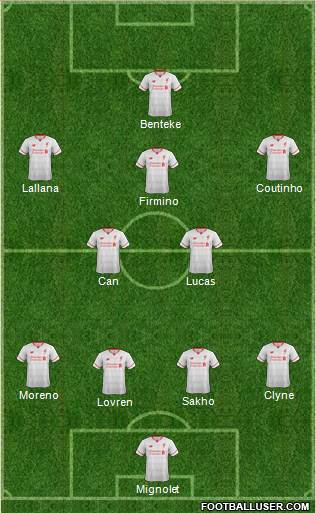