Chelsea take on Swansea City at the Liberty Stadium on Sunday afternoon. Here is the side we think Antonio Conte will select for the game:

Chelsea take on Swansea City at the Liberty Stadium on Sunday afternoon. Here is the side we think Antonio Conte will select for the game:

Goalkeeper: Thibaut Courtois is expected to keep his place between the sticks with Asmir Begovic once again on the bench.

Defence: The big question mark is whether David Luiz will make his second debut for the Blues after completing a sensational return to west London from Paris Saint-Germain on deadline day.

Left-back Marcos Alonso is also pushing to make his first start for Chelsea after completing a big-money move from Fiorentina before the international break but Conte suggested at his pre-match press conference this afternoon that neither player is ready to start just yet.

Therefore, with Kurt Zouma still out with a long-term knee injury, I expect Conte to stick with the back four that started at Burnley with Gary Cahill alongside John Terry and Branislav Ivanovic and Cesar Azpilicueta in the full-back positions.

Midfield: Cesc Fabregas has fallen out-of-favour under Conte so far this season and there is nothing to suggest that it won’t continue so I expect the Spanish international to once again start from the bench on Sunday.

Nemanja Matic is likely keep his place alongside Oscar in midfield with N’Golo Kante sitting in the holding role in front of the back four.

Attack: Conte has no fresh injury worries to contend with so I think it will be a familiar attack with Eden Hazard and Willian supporting main striker Diego Costa.

Michy Batshuayi is pushing for a start but I think the Belgian international will have to make do with a place among the substitutes along with the likes of Victor Moses. 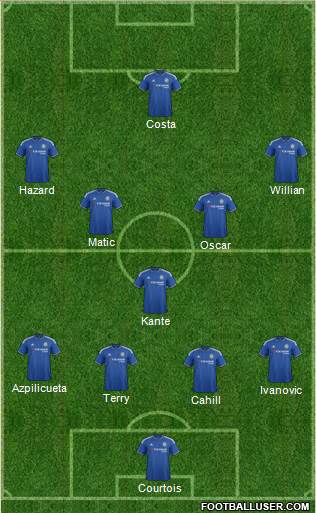