Manchester United will kick start their Europa League campaign away to Feyenoord on Thursday night. Here is the side I think Mourinho will pick for the game:

Manchester United will kick start their Europa League campaign away to Feyenoord on Thursday night. Here is the side I think Mourinho will pick for the game:

Goalkeeper: Mourinho is expected to make plenty of changes to his side ahead of Sunday’s trip to Watford but I think he’ll stick with David de Gea in goal.

Defence: Luke Shaw has been left back in Manchester to rest and Mourinho has already confirmed that Marcos Rojo will start tomorrow night while Matteo Darmian could be given the nod at right-back with Antonio Valencia also not travelling to Holland.

Eric Bailly has been outstanding so far following his move this summer but the youngster could get a rest with Chris Smalling coming in alongside Daley Blind at the back. Phil Jones isn’t available as he’s been ruled out for up to a month with a knee injury.

Midfield: I expect changes in midfield with Paul Pogba and Marouane Fellaini rested. Michael Carrick could come in to make his first start of the new season while Morgan Schneiderlin is also pushing for some game-time.

Attack: Marcus Rashford is certain to start after making another superb impression from the bench during Saturday’s 2-1 defeat to Manchester City so Zlatan Ibrahimovic could get a well-earned rest up front.

Wayne Rooney hasn’t travelled to Rotterdam so Ander Herrera could be deployed in a more advanced position in attack after also getting praise for his performance from the bench against City while Anthony Martial is expected to come back in to the side after being a substitute at the weekend.

Henrikh Mkhitaryn isn’t in the squad amid reports the Armenian international aggravated a thigh injury during the loss against City so Juan Mata could regain his place in the attack on Thursday night. 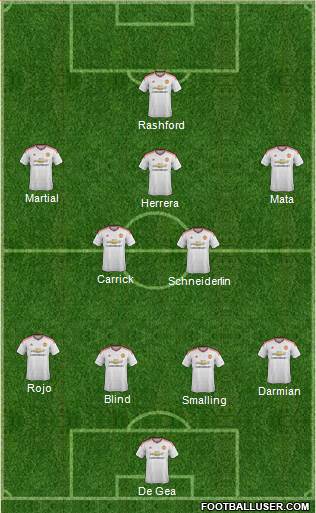 What team would you like to see start the game?