Manchester United take on Everton at Goodison Park on Sunday afternoon. Here is the team I think Jose Mourinho will pick for the game:

Manchester United will be looking to close in on the top four in the Premier League table when they take on Everton at Goodison Park on Sunday afternoon.

Goalkeeper: David de Gea dropped a rare error during the midweek win over West Ham but the Spaniard is expected to retain his place between the sticks on Sunday.

Defence: Luke Shaw has been ruled out of the game after suffering a knock during the League Cup victory on Wednesday night. Daley Blind replaced the England international at half-time so he should come in at left-back this weekend.

Antonio Valencia should once again start at right-back while Phil Jones and Marcos Rojo are forming a decent partnership in the middle of defence with Eric Bailly and Chris Smalling still recovering from their injuries.

Midfield: Paul Pogba will return to the starting eleven after missing the midweek win over West Ham through suspension but the world record signing could be deployed in a more advanced role with Michael Carrick once again starting alongside Ander Herrera at the base of midfield.

Marouane Fellaini is also back in contention to face his former club after serving his own one-match ban but the Belgian international will have to make do with a place on the bench.

Attack: Wayne Rooney will miss the game after picking up his fifth booking of the season against West Ham but Anthony Martial should keep his place in attack after scoring twice last time out.

Henrikh Mkhitaryan will also be hoping to retain his place after another Man of the Match display in midweek with the Armenian international grabbing two assists in a virtuoso display at Old Trafford.

Juan Mata may be the one to miss out if Mourinho decides to stick with Mkhitaryan while Zlatan Ibrahimovic should once again lead the line up front with Marcus Rashford among the substitutes. 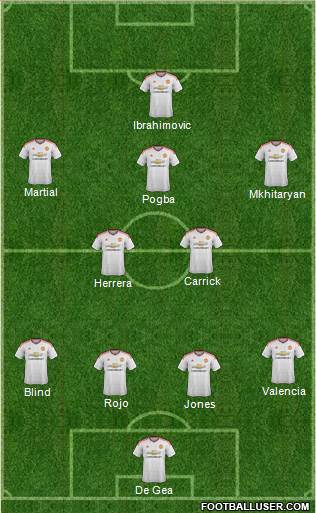