Liverpool will be looking to book their place in the fourth round of the FA Cup when they take on Plymouth at Anfield on Sunday afternoon. Here is the side I think Jurgen Klopp will select for the game:

Goalkeeper: The Reds boss confirmed at his pre-match press conference this morning that Loris Karius is set to start between the sticks so Simon Mignolet will be given a rest.

Defence: Klopp also revealed that he’ll freshen things up for this FA Cup tie with the German coach expected to make wholesale changes in order to give his key men a well-earned breather following the hectic festive period.

Joel Matip is due to resume training any day now after recovering from an ankle injury but this game comes too soon so he remains unavailable for selection while Dejan Lovren and Ragnar Klavan should be rested.

Klopp has hinted that Joe Gomez will be given his first start in over 16 months as the defender looks to get his career back on track following a serious injury while Lucas Leiva could be given a run out in defence.

Trent Alexander-Arnold could come in for Nathaniel Clyne at right-back while Alberto Moreno is set to start at left-back in place of James Milner – who’s been ruled out with a calf injury.

Midfield: Jordan Henderson missed the draw at Sunderland on Monday due to a heel injury and the skipper won’t be risked on Sunday while Adam Lallana is expected to be rested.

Youngsters Kevin Stewart and Ovie Ejaria could be given another chance to impress in the first team but Emre Can or Gini Wijnaldum may be retained to provide some experience in the middle of the park.

Attack: Daniel Sturridge is due to resume training today after picking up a minor ankle problem at Sunderland earlier this week but the striker may not be risked from the start on Sunday.

Philippe Coutinho is progressing well as he looks to regain full fitness following six weeks out with an ankle injury but the Brazilian will sit out the FA Cup tie this weekend.

Sadio Mane is off to prepare for the Africa Cup of Nations while Roberto Firmino should be given a breather so youngsters Ben Woodburn and Sheyi Ojo could be given run outs in attack with Divock Origi expected to lead the line up front. 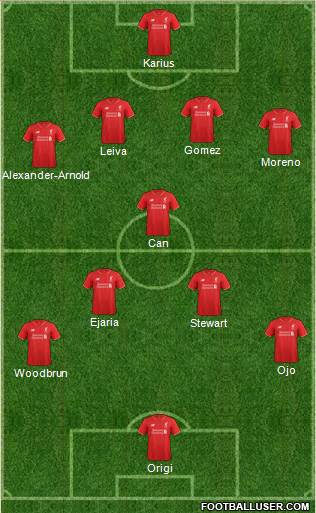