Liverpool will be looking to book their place in the 5th round of the FA Cup when they entertain Wolves on Saturday. Here is the side I think Klopp will select

Liverpool will be looking to book their place in the fifth round of the FA Cup when they entertain Wolves at Anfield on Saturday lunchtime. Here is the side I think Jurgen Klopp will select for the game:

Goalkeeper: The Reds boss has stuck with Loris Karius in the previous FA Cup games so I think we should expect to see the German youngster keep his place on Saturday with Simon Mignolet on the bench.

Defence: Nathaniel Clyne missed the EFL Cup defeat to Southampton last night with a rib/abdominal injury so he is unlikely to be risked this weekend ahead of the crucial clash with Chelsea meaning Trent Alexander-Arnold should retain his place at right-back.

Alberto Moreno is expected to be given a rare run-out at left-back with James Milner rested while I think we’ll also see Joel Matip and Dejan Lovren drop out. That would leave the door open for youngster Joe Gomez to be given another start at the back and he could be joined by Ragnar Kalvan.

Midfield: Klopp confirmed earlier this week that Jordan Henderson is still feeling discomfort in his heel so he’s likely to take this opportunity to give his skipper a breather. Lucas Leiva could therefore start in the holding role.

Gini Wijnaldum was named on the bench last night so he should come back in to the side while youngster Ovie Ejaria could get the nod in the middle of the park with Adam Lallana and Emre Can rested.

Attack: Philippe Coutinho is expected to be given a breather as Klopp won’t want to overwork the Brazilian after he only recently returned from an ankle injury so he’ll be saved for the Chelsea game.

Roberto Firmino should also get a rest while Daniel Sturridge was in disappointing form against Southampton so I think we’ll see Divock Origi start up front. With Sadio Mane still away at the African Cup of Nations, youngsters Ben Woodburn and Sheyi Ojo could be given another chance to impress in attack. 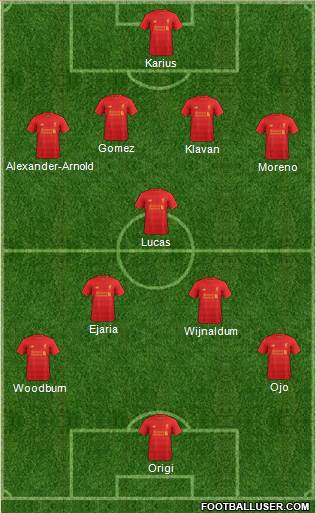 Liverpool are understandably the heavy favourites to win the game but the Reds have been in inconsistent form of late so it’s difficult to predict which side will turn up this weekend. That’s where Odinbet comes in….