Manchester United entertain Hull City at Old Trafford on Wednesday night. Here is the team I think Jose Mourinho will pick for the game:

Manchester United will be looking to close in on the top four in the league table when they entertain Hull City at Old Trafford on Wednesday night.

Goalkeeper: David De Gea will return between the sticks after being rested for Sunday’s FA Cup win over Wigan so Sergio Romero will drop out..

Defence: Mourinho has already confirmed that he’ll freshen things up and recall those who didn’t play at the weekend so Phil Jones is expected to come back in to resume his partnership alongside Marcos Rojo.

Antonio Valencia is a confirmed starter at right-back while Daley Blind could come in at left-back with Timothy Fosu-Mensal and Chris Smalling making way. Eric Bailly has been passed fit despite picking up a knock while playing for the Under-23’s on Monday but he’s unlikely to be risked from the start tomorrow.

Midfield: It should be all change in midfield against Hull with Ander Herrera and Michael Carrick expected to come back in after being rested on Sunday with Marouane Fellaini and Bastian Schweinsteiger axed despite both getting on the score-sheet against Wigan.

Mourinho has confirmed that Paul Pogba will also come back in to the side tomorrow so Juan Mata should make way in the advanced central midfield role.

Attack: Zlatan Ibrahimovic will be back to lead the line up front so Wayne Rooney is set to make way while I expect Jesse Lingard may get a recall out wide after not being involved at the weekend.

Anthony Martial will be hoping for another chance to impress after returning to the side on Sunday while Marcus Rashford may also be pushing for a recall but I think we might see Henrikh Mkhitaryan retain his place in attack. 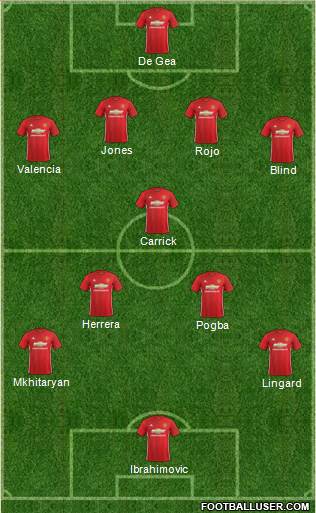