Man Utd take a commanding lead in to the second leg of their Europa League clash with Saint-Etienne on Wednesday. Here is the team I think Mourinho will pick

Manchester United will be looking to get the job done when they take a commanding lead in to the second leg of their Europa League clash with Saint-Etienne on Wednesday night.

Goalkeeper: Mourinho has gone with Sergio Romero for the last two games and I think the Argentinean will once again start between the sticks with David De Gea saved for the EFL Cup final this weekend.

Defence: Phil Jones remains out with a foot injury and is facing a race against time to be passed fit for the Southampton clash on Sunday. Mourinho is likely to shuffle his pack again to keep players fresh so we could see Eric Bailly come in for Marcos Rojo alongside Chris Smalling at the back.

Ashley Young put in a solid shift at right-back during the win over Blackburn in the FA Cup at the weekend so he could be retained with Antonio Valencia rested for the cup final but Daley Blind could replace Matteo Darmian at left-back with Luke Shaw once again missing out.

Midfield: Ander Herrera will miss the game through suspension after picking up another yellow card in the first leg so Marouane Fellaini could get a start in midfield.

Michael Carrick is expected to be given a breather ahead of the cup final so we could see Paul Pogba start in a deeper role – although Bastian Schweinsteiger is another option for Mourinho if he wants to rest his world record signing.

Attack: Wayne Rooney is back in training today so he has an outside chance of making the squad, despite Mourinho suggesting at the weekend that the attacker wouldn’t be fit.

Marcus Rashford could keep his place up front after scoring at the weekend and that would allow Zlatan Ibrahimovic to rest his legs ahead of the EFL Cup final.

Henrikh Mkhitaryan is another who may be given a breather with Juan Mata coming in to the attack but Anthony Martial and Jesse Lingard could keep their places. 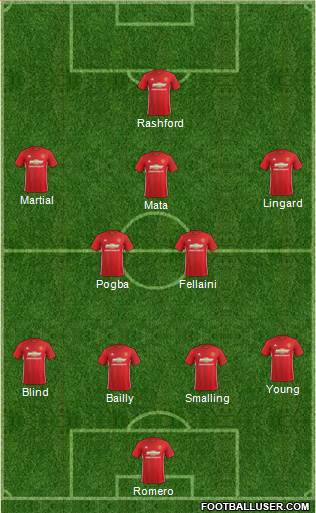