Adebayor To Liverpool? I’d Snap Their Hand Off! 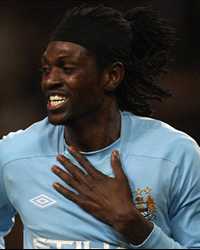 Liverpool are reported to have made a firm enquiry about Manchester City’s Emmanuel Adebayor. The striker is out of favour at the club with Balotelli and Tevez ahead of him in the side.

Also, the impending arrival of Edin Dzeko in the window will make it impossible for the the former Arsenal player to get his place back in the City team. To make matters worse for the player, he was involved in a training ground bust-up with team-mate Yaya Toure yesterday, so an early exit is now inevitable for the Togo International.

Whether Liverpool make a cash offer for the player, he cost City £25 million, or they opt to try to take him on loan remains to be seen. With a player of this quality, we should definately be trying to bring him to Anfield, as he would be an instant success upfront alongside Fernando Torres.

The only stumbling block is the future of Roy Hodgson, my gut feeling is that he will be given a bit more time by NESV to improve Liverpool’s results on the pitch. Lets get Adebayor, he would make a huge difference to our team.