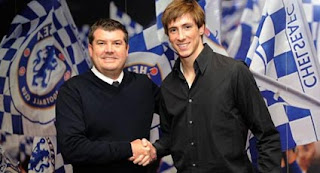 Fernando Torres has left all Liverpool fans with a feeling of bitterness and betrayal after his transfer to rivals Chelsea.

Comments from the Spaniard following his signing on Monday night at Stamford Bridge have further angered the Anfield faithful, saying “I have moved up to a new level in Chelsea” and adding that he hopes to score against Liverpool on Sunday, saying that it is his “destiny”.

What a scumbag. He didn’t take long to change his website either:

Its gone from the Red of Liverpool to the Blue of Chelsea overnight. So much for loyalty you scumbag, at least we got £50 million for you!