Analysing how Ole Gunnar Solskjaer has got Manchester United midfielder Paul Pogba back to top form after poor showing under Jose Mourinho.

The enigma of a footballer, Paul Pogba, has always left fans and pundits scratching their heads with his performances in a Manchester United shirt. Its safe to say he splits opinions across everyone who watches football. The 6 foot 2 midfielder has always been ogled upon for his burst of pace with his unique long stride running and fleet footed trickery in any one on one situations.

Ever since his return to Manchester United, Mourinho has used Pogba in various formations and roles in his team but was never able to build a team around the midfielder. Pogba was never the central cog in the United midfield room under Mourinho. Defensive duties are paramount for Mourihno rather than playing to the squads attacking potential. Such a philosophy never suited Pogba – who is more of a free offensive minded spirit on the football pitch.

Pogba’s role in a 3 man midfield under Mourinho was mostly as a LCM (left center midfielder) who rarely ventures into the box as his defensive duties shackled him from participating more in United’s attack. Pogba spends more time in the middle of the park behind the half way line and his role primarily is to boss the midfield battle and hold on to possession. Looking at the heat maps of his last 2 starts under Mourinho in a 3 man midfield speaks volumes of his positional play. 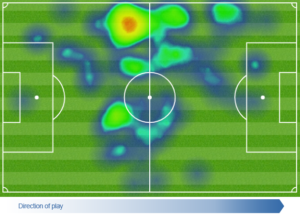 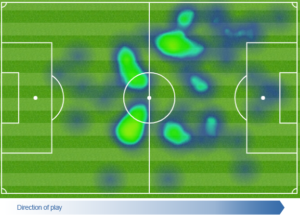 Pogbo was unable to bomb forward in this setup clearly wasn’t enjoying his football. His performances dipped to such an extent forcing Mourinho to drop him from the starting 11 for the next 3 games and the Portuguese coach eventually got the sack.

Ole Gunnar Solskjaer was a surprise appointment as an interim/ caretaker manager of Manchester United for the remainder of 2018-19 season. The appointment was explained as a return to United’s old heritage of playing with flair, upholding the legacy and promoting youth. The fact that Solskjaer trained and managed Paul Pogba during his time as Manchester United Reserves manager clearly was an open secret which echoed United’s mission to harness Pogba’s potential.

The shackles were well and truly off once Solskjaer took reign. Starting all the 4 games under the new management, United have scored 14 goals out of which Pogba has been directly involved in 8 goals (4 scored, 4 assisted). 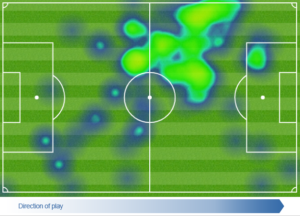 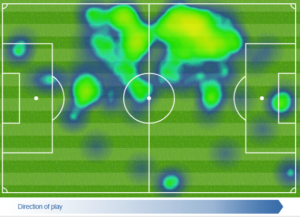 His last 2 games shows his positional play more on the opposition half, getting involved in attack rather than worrying about possession or defensive duties. By letting him run loose more, his role in a 3 man midfield under Solskjaer can be more of an attack minded left midfielder. His link up with the attacking trio upfront is more fluid due to his high position up the pitch and his late timed runs into box have caused havoc.