Liverpool take on Bayern Munich at the Allianz Arena on Wednesday night. Here is the team we think Jurgen Klopp will select:

Liverpool will be looking to book their place in the quarter-finals of the Champions League when they take on Bayern Munich at the Allianz Arena on Wednesday night. Here is the team we think Jurgen Klopp will select:

Goalkeeper: Alisson was unfortunate to see his run of clean sheets end against Burnley at the weekend but the Brazilian international will obviously keep his place and he would give his right leg [not literally] for a clean sheet tomorrow.

Defence: Liverpool will assess Trent Alexander-Arnold tomorrow morning after he picked up a back injury against Burnley on Sunday afternoon. The 20-year-old took part in full training today and Klopp seems confident he’ll be fit so I expect Alexander-Arnold to start at right-back against Bayern.

Andrew Robertson should also keep his place at left-back ahead of Alberto Moreno while Joel Matip is expected to line-up alongside Virgil van Dijk once again. Dejan Lovren is fit again but it would be a big risk to throw him straight back in to the team after two months out so Matip is the sensible choice for Liverpool.

Midfield: Liverpool have been dealt a late blow as Naby Keita has failed to make the trip to Munich after suffering a knock so Klopp will have to make-do without the Guinean international against Bayern tomorrow.

However, James Milner is available after being passed fit and I think the experienced midfielder will get a recall as Klopp often turns to the hard-working 33-year-old in big games such as this – especially away from home when Liverpool need to keep things tight.

Jordan Henderson is also pushing for a recall after being named on the bench against Burnley at the weekend. Georginio Wijnaldum has been a key player for Liverpool this season and it would be hash to leave him out but Klopp might want fresh legs in midfield.

Adam Lallana was excellent at the weekend upon his return to the starting eleven but I don’t see him retaining his place against Bayern tomorrow so he’ll probably drop back to the bench.

Attack: Roberto Firmino made a successful return from a minor knock at the weekend after scoring twice against Burnley and no doubt the South American will once again start in attack as Liverpool look to score that all-important away goal.

Sadio Mane’s fine recent form continued with another brace on Sunday so he’s almost certain to start once again while Mohamed Salah will also line-up in a familiar attack after putting in an excellent all round display at Anfield at the weekend.

Therefore, the likes of Xherdan Shaqiri, Daniel Sturridge and Divock Origi will have to make do with places on the bench for this huge Champions League tie.

Alex Oxlade-Chamberlain made his return from a long-standing knee injury with a run out for the U23’s last Friday but he’s not ready for first team action just yet so he remains out along with Joe Gomez. 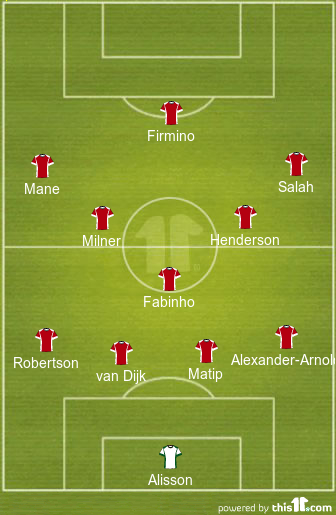