Manchester United take on Everton at Goodison Park on Sunday afternoon. Here is the line-up I think Ole Gunnar Solskjaer will go with…

Manchester United will be looking to close-in on the top four with a win over Everton at Goodison Park on Sunday afternoon. Here is the line-up I think Ole Gunnar Solskjaer will go with…

Goalkeeper: David De Gea was badly at fault for Lionel Messi’s second goal during Man Utd’s defeat to Barcelona in the Champions League in midweek but it was a rare error from the Spaniard so he’s still certain to keep his place between the sticks.

Defence: Man Utd will once again be without Luke Shaw as he completes a two-match suspension having reached 10 bookings this season so Ashley Young is likely to continue at left-back this weekend.

Phil Jones was surprisingly named at right-back against Barcelona but he’s expected to make way against Everton with Diogo Dalot recalled. Chris Smalling should keep his place alongside Victor Lindelof but Eric Bailly is set to miss out once again.

Midfield: Nemanja Matic is pushing for a recall in the middle of the park and Solskjaer may be tempted to freshen things up after a gruelling defeat at the Nou Camp on Tuesday night. The Serbian international could replace Fred as Scott McTominay is likely to keep his place after some impressive displays in recent games.

Ander Herrera is set to miss out with a hamstring injury that’s hampered him this month but Paul Pogba should keep his place in the Man Utd midfield despite a disappointing display against Barca last time out.

Attack: United have plenty of options in attack and I think Solskajer will make at least one change to his forward three following their disappointing defeat to Barcelona.

Romelu Lukaku is pushing for a recall and he could line-up against his former side which may see Marcus Rashford moved out wide if Solskjaer opts against playing with two strikers through the middle.

Alexis Sanchez is back in contention after recovering from a knee injury but the Chilean international is expected to remain on the bench while Juan Mata may also have to make-do with a place among the substitutes.

Anthony Martial is likely to keep his place in the United starting eleven so Jesse Lingard may be the man to drop out if Solskjaer decides to recall Lukaku against Everton tomorrow afternoon. 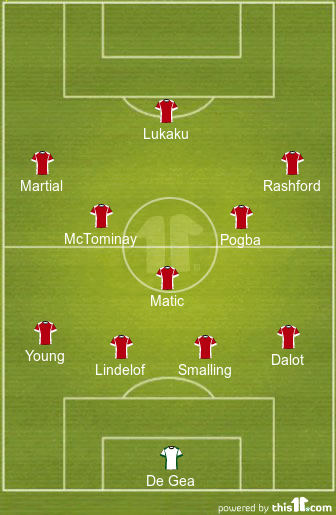