Liverpool will be looking to regain top spot with victory over Huddersfield at Anfield on Friday. Here is the team we think Jurgen Klopp will select:

Liverpool will be looking to regain top spot in the Premier League table with victory over Huddersfield Town at Anfield on Friday night. Here is the team we think Jurgen Klopp will select:

Goalkeeper: There is no point debating over who’ll start in goal as Alisson Becker is certain to keep his place between the sticks against Huddersfield tomorrow night.

Defence: Liverpool are set to welcome Dejan Lovren back into the squad after he missed the win at Cardiff City through illness. Joe Gomez made his first appearances since December with a cameo off the bench but it’s probably too soon for the youngster to start. Therefore, if Klopp wants to give Joel Matip a rest then Lovren is the man most likely to come in alongside Virgil van Dijk.

The Reds boss would ideally like to give the likes of Andrew Robertson and Trent Alexander-Arnold the night off ahead of next week’s huge Champions League semi-final first leg with Barcelona. However, Liverpool can’t really afford to take too many risks so I think we’ll see Alexander-Arnold and Robertson once again starting in the full-back positions.

Midfield: Georginio Wijnaldum made a successful return to the Liverpool starting eleven after scoring a superb opening goal at Cardiff on Sunday and he should keep his place in the middle of the park.

Naby Keita was also in good form last time out while Jordan Henderson will be hoping to retain his place in the Liverpool midfield but I think Klopp will freshen things up ahead of their trip to the Nou Camp next week.

Fabinho is pushing for a recall after not featuring at Cardiff due to a minor head problem while James Milner could also come in to the Liverpool line-up against Huddersfield on Friday night.

Adam Lallana will be given a late fitness test on a muscle problem which has kept him out of the last two games but this match will come too soon for Alex Oxlade-Chamberlain as he continues to work his way back to full fitness from a long-term knee injury.

Attack: Liverpool simply have to win tomorrow night if they’re to snatch the title away from Man City so I don’t think Klopp will take too many risks with his line-up. Mohamed Salah and Sadio Mane are fully expected to retain their places in attack and they’ll cause Huddersfield plenty of problems at Anfield.

However, the Liverpool boss may decide to give Roberto Firmino a breather with Divock Origi pushing for a recall after seeing more first team minutes in recent weeks. Daniel Sturridge and Xherdan Shaqiri are also options for Liverpool but I think they’ll have to settle for places on the bench. 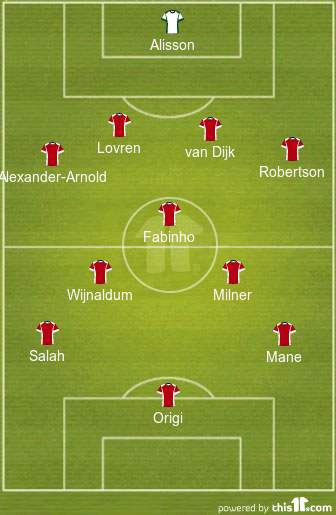