Manchester United take on Cardiff City at Old Trafford on Sunday afternoon. Here is the line-up I think Ole Gunnar Solskjaer will go with…

Manchester United will look to end a hugely disappointing season on a high note when they take on Cardiff City at Old Trafford on Sunday afternoon. Here is the line-up I think Ole Gunnar Solskjaer will go with…

Goalkeeper: David De Gea is expected to start what could be his final game in a Man Utd shirt amid on-going speculation linking him with a move this summer.

Defence: Man Utd were hugely disappointing during the 1-1 draw with Huddersfield last weekend and Solskjaer has confirmed he will rotate his squad with Antonio Valencia among those who could be recalled. The full-back will leave United this summer and Solskjaer is keen to give him one final appearance as long as the Ecuadorian international comes through a fitness test.

Chris Smalling was an unused substitute last Sunday after recovering from injury but he could be recalled alongside Victor Lindelof against Cardiff while Luke Shaw should keep his place at left-back after winning the clubs Player of the Year Award.

Phil Jones, Diogo Dalot, Matteo Darmian and Ashley Young will be pushing for places in the squad but Eric Bailly is certain to miss out with a serious knee injury.

Midfield: Ander Herrera is another player who could make his final appearance in a Man Utd shirt on Sunday as the midfielder is out-of-contract and has been strongly tipped for a move to PSG.

Scott McTominay could get another run out meaning Nemanja Matic could make way for Herrera while Paul Pogba is expected to once again start in the middle of the park. Youngster Tahith Chong is expected to be in the squad and could feature after coming off the bench against Huddersfield.

Attack: Man Utd have injury concerns in attack as Romelu Lukaku is set to miss out once again with a hamstring injury while Anthony Martial is also struggling with a knock that kept him out of action last weekend.

Alexis Sanchez is also a major doubt for the visit of Cardiff on Sunday after suffering an ankle injury last time out but Jesse Lingard is set for a recall after recovering from a knee injury that’s kept him out of recent matches.

Marcus Rashford should keep his place up front but Solskjaer has hinted that he’ll give some of his youngsters a chance so Mason Greenwood could feature after overcoming a knock. The 17-year-old may be handed his full first team debut with a start alongside Rashford up front.

Juan Mata is another option for United while youngster Angel Gomes is likely to be named in the match-day squad after training with the first team this week. 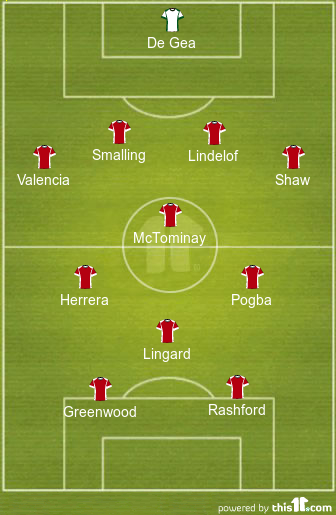