Tottenham take on Manchester City at the Etihad Stadium on Saturday evening. Here is the side we think Mauricio Pochettino will select for the game:

Tottenham will look to make a statement of intent in the title race when they take on champions Manchester City at the Etihad Stadium on Saturday evening.

Goalkeeper: There is very little debate over who’ll start in goal as Hugo Lloris will retain the gloves unless he picks up a late injury. Pablo Gazzaniga will once again have to make do with a place on the bench.

Defence: Pochettino could be set to recall Jan Vertonghen after the Belgian international was surprisingly left out of Tottenham’s opening weekend win over Aston Villa. Davinson Sanchez is the man most likely to make way as Toby Alderweireld should keep his place despite lingering doubts over his long-term future at the club.

Ben Davies is close to making a return from injury but Danny Rose may keep his place at left-back while Kyle Walker-Peters appears to be ahead of Serge Aurier in the right-back pecking order at the minute.

Juan Foyth will serve the final game of his three-match ban but the defender would be unavailable anyway due to injury while Ryan Sessegnon is still recovering from a hamstring complaint.

Midfield: Tottenham’s record signing of Tanguy Ndombele made a dream debut as he scored a vital equaliser to help Spurs on their way to a 3-1 win over Villa last weekend and the French international should retain his place in midfield.

Harry Winks is likely to take the holding role with Eric Dier and Victor Wanyama having to settle for places on the bench while Moussa Sissoko is expected to complete the three-man midfield alongside Winks and Ndombele.

Attack: Christian Eriksen was named as a substitute against Villa but the Danish international is likely to be recalled against Man City after coming off the bench to change the game last weekend.

Deadline day signing Giovani Lo Celso wasn’t involved against Aston Villa but he’s had a full weeks training with his new team mates so he may be named on the bench against City.

Dele Alli remains out with a hamstring injury and Hueng-min Son will complete his three-game suspension so Lucas Moura is likely to keep his place in the Tottenham attack.

Harry Kane proved his worth yet again last weekend as he scored a late brace to secure all three points for Tottenham so he’s certain to start tomorrow evening but Erik Lamela may find himself dropping to the bench. 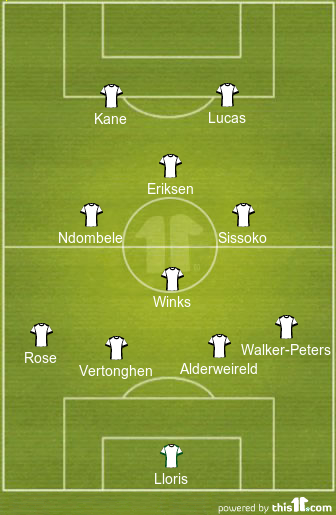