Manchester United take on Leicester City at Old Trafford on Saturday afternoon. Here is the team we think Ole Gunnar Solskjaer will select:

Manchester United will be looking to get back to winning ways when they take on Leicester City at Old Trafford on Saturday afternoon. Here is the team we think Ole Gunnar Solskjaer will select:

Goalkeeper: There isn’t much point spending time debating over who’ll start in goal as David De Gea is certain to retain the gloves this weekend with Sergio Romero on the bench once again.

Defence: Man Utd are expected to be without Luke Shaw once again as the full-back is still struggling with a hamstring injury that kept him out of the 1-1 draw at Southampton before the international break. Ashley Young is therefore expected to keep his place at left-back.

Aaron Wan-Bissaka will require a late fitness test after pulling out of the England squad with a back injury but it’s not thought to be serious so I think we’ll see the big-money summer signing passed fit to keep his place.

Harry Maguire will obviously retain his place alongside Victor Lindelof with Axel Tuanzebe, Phil Jones and Marcos Rojo vying for places on the bench.

Midfield: Man Utd will assess Paul Pogba in training tomorrow before making a decision over his availability after the midfielder missed both of France’s games during the international break with an ankle problem. However, United are hopeful Pogba will be fit so he should keep his place this weekend.

Scott McTominay has cemented his place in Solskjaer’s starting eleven so he should continue to keep Nemanja Matic out of the team. Jesse Lingard is expected to recover from illness that kept him out of England duty so he could return in the advanced midfield position this weekend with Juan Mata the man to drop out.

Attack: Manchester United are hopeful that Anthony Martial will return to the fold after recovering from a thigh injury that kept him out of the Southampton game two weeks ago.

Assuming he’s fit, Martial could return up front against Newcastle with Marcus Rashford moved out to the left side of the attack – although the duo will interchange throughout the game.

Daniel James continued his fine start to the new season with a goal for Wales this week so the youngster should retain his place in the United attack. Andreas Pereira started against Southampton but he could find himself dropped to the bench this weekend where he’ll join Mason Greenwood. 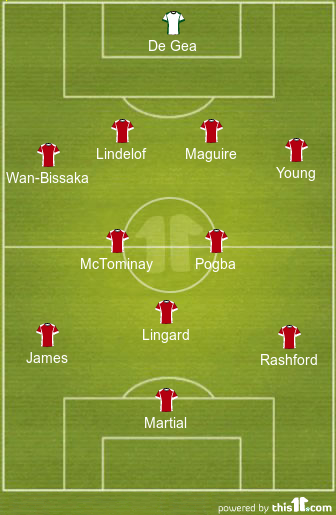