Manchester United take on West Ham at the London Stadium on Sunday afternoon. Here is the team we think Ole Gunnar Solskjaer will select:

Manchester United take on West Ham at the London Stadium on Sunday afternoon. Here is the team we think Ole Gunnar Solskjaer will select for the game:

Goalkeeper: Sergio Romero kept a clean sheet during a routine display against Astana in the Europa League on Thursday night but David De Gea will be recalled between the sticks against West Ham this weekend.

Defence: Solskjaer is set to make wholesale changes to his back four for the trip to West Ham. Aaron Wan-Bissaka got the night off against Astana with Diogo Dalot making his return at right-back but the England international will be recalled on Sunday.

Luke Shaw remains on the sidelines with a hamstring injury so Ashley Young is set to come back into the side at left-back with Marcos Rojo making way following his rare appearance in the Europa League.

Axel Tuanzebe and Phil Jones did well enough against a limited Astana side on Thursday night but there is no doubt Victor Lindelof and Harry Maguire will be recalled after being rested for Man Utd’s 1-0 Europa League win.

Midfield: Man Utd will once again be without the services of Paul Pogba as he’s yet to resume full training having missed the last three matches with an ankle injury but Scott McTominay will come back into the side after being rested against Astana.

Nemanja Matic will be hoping to start in midfield but Fred was excellent last night and may feel he’s done enough to keep his place so we may see Matic dropping to the bench this weekend. Angel Gomes was given a start in Europe but the youngster is expected to make way against West Ham.

Attack: Manchester United will make changes in attack with Tahith Chong set to drop out after a quiet night against Astana while fellow youngster Mason Greenwood may also make way despite getting himself on the score-sheet.

Anthony Martial remains on the sidelines with the thigh injury that’s hampered him this month so Marcus Rashford is expected to lead the line up front for the Manchester giants.

Daniel James will face a late fitness test after missing the Astana game with a knock but Solskjaer will give the flying winger every opportunity to prove his fitness as he’s become an important player for United following an impressive start to his career at Old Trafford.

Jesse Lingard is back in contention after recovering from illness and could start ahead of Andreas Pereira in attack while Juan Mata may be recalled after being named on the bench on Thursday night. 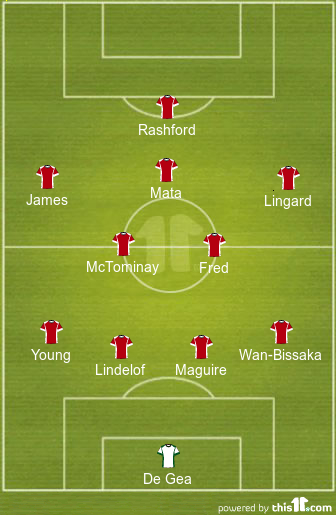