Liverpool take on Sheffield United at Bramall Lane on Saturday afternoon. Here is the team we expect Jurgen Klopp to select for the game:

Liverpool will be looking to maintain their perfect start to the new Premier League campaign when they take on Sheffield United on Saturday afternoon. Here is the team we expect Jurgen Klopp to select for the game:

Goalkeeper: Alisson Becker is making good progress in his recovery from a calf injury that’s kept him out since the opening game of the season but the Brazilian remains out this weekend. Therefore, Adrian will be recalled after being rested in midweek with Caoimhín Kelleher making way following his debut in the League Cup.

Defence: Klopp will make wholesale changes to his defence with Andy Robertson and Trent Alexander-Arnold recalled in the full-back positions after being rested for Liverpool’s game against the MK Dons on Wednesday night. Ki-Jana Hoever and James Milner will drop out despite both getting on the scoresheet during the Carabao Cup win.

Virgil van Dijk will obviously be recalled after being given a well-earned rest last night while I expect Joel Matip to come back in alongside the Dutchman with Joe Gomez and Dejan Lovren making way.

Midfield: Naby Keita made his comeback from injury against the MK Dons but he’s going to need some time to get back to his best form so I expect him to make way against Sheffield United.

Alex Oxlade-Chamberlain and Adam Lallana are also set to make way after starting in the League Cup victory with Fabinho, Jordan Henderson and Gini Wijnaldum all recalled after being given a rest last night.

Attack: Liverpool’s first choice front three are set for a recall after not travelling to Milton Keynes for the Carabao Cup. Understandably, Klopp opted to rest Mohamed Salah and Roberto Firmino for the game while Sadio Mane was ruled out with a dead leg that he suffered against Chelsea last weekend.

However, the Senegalese international trained today so is expected to be passed fit to return this weekend so Mane should start alongside Salah and Firmino at Bramall Lane on Saturday afternoon.

Youngster Rhian Brewster has a huge future ahead of him and showed glimpses of his quality against the MK Dons but he’ll drop out this weekend. A place on the bench is possible if Divock Origi is ruled out but the Belgian trained today following a minor ankle injury.

Harvey Elliott impressed on his debut last night but he’ll make way along with Curtis Jones while Xherdan Shaqiri will miss out with a calf injury that he sustained in training last week. 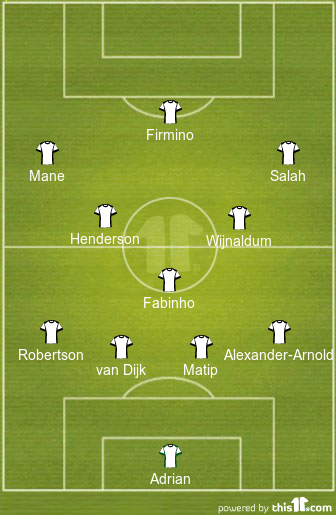