Piers Morgan blasted Mesut Ozil for his ‘pathetic’ reaction to being substituted during the Arsenal’s 3-0 defeat to Manchester City this afternoon. 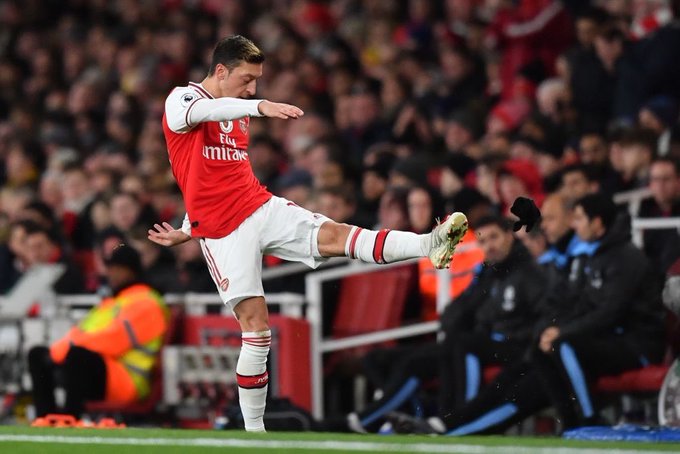 Celebrity Arsenal fan Piers Morgan blasted Mesut Ozil for his ‘pathetic’ reaction to being substituted during the Gunners’ 3-0 defeat to Manchester City at the Emirates this afternoon.

City didn’t take long to break the deadlock in north London as Kevin De Bruyne fired home a superb opener in the second minute before setting up Raheem Sterling to make it 2-0 just 12 minutes later.

Arsenal lost Sead Kolasinac to injury just before half-time and with the hosts temporarily down to 10 men while Bukayo Saka waited to be introduced, City took full advantage with De Bruyne making it 3-0 with a wonderful strike from the edge of the area.

Interim boss Freddie Ljungberg had Bernd Leno to thank for keeping the scoreline respectable but he may want a word with playmaker Mesut Ozil following his petulant reaction to being substituted in the 59th minute.

Ozil walked slowly from the pitch when his number was called, ripped off his gloves before angrily kicking one away and he barely gave Ljungberg or Per Mertesacker a handshake as he took his seat on the bench.

There were a few boos around the Emirates stadium from unimpressed fans and Ozil’s reaction didn’t go down well with Piers Morgan either as the TV presenter took to Twitter to blast the German as ‘pathetic’ reaction – which he likened to a ‘petulant kid’.

Ozil subbed after 58 mins & responds by crawling off like a snail & throwing his gloves away like a petulant kid. Pathetic. pic.twitter.com/d2Ugv0pu13

You could give Ozil the benefit of the doubt and say he just let his frustrations get the better of him following a hugely disappointing afternoon for Arsenal but a player of his experience should know better.

Ozil deserved to be subbed as his performance was woeful with the playmaker barely putting in any effort to drag Arsenal back into the game. Fans should expect more from a player who earns £350k per week and Ljungberg should certainly have a word in his ear.