Chelsea take on Brighton & Hove Albion at the Amex Stadium on New Years Day. Here is the team we expect Frank Lampard to select for the game:

Chelsea take on Brighton & Hove Albion at the Amex Stadium on New Years Day. Here is the team we expect Frank Lampard to select for the game:

Goalkeeper: Kepa Arrizabalaga is certain to keep his place between the sticks with Willy Caballero once again on the bench.

Defence: Chelsea deployed a back three against Arsenal and Lampard was forced to switch formation after just 30 minutes so I fully expect the Blues boss to start with a back four at Brighton.

It will be a tough decision over who to leave out but youngster Fikayo Tomori could be the man to make way with Kurt Zouma and Antonio Rudiger keeping their places.

Emerson Palmeiri was hauled off early at the Emirates and he could be replaced by Marcos Alonso at left-back if the Spaniard overcomes a minor muscle issue. Cesar Azpilicueta is likely to keep his place at right-back with Reece James ruled out with an ankle injury.

Midfield: The switch in formation would give Chelsea an extra player in midfield which would allow Jorginho to be recalled as he made a huge impact off the bench during Chelsea’s win over Arsenal.

Mateo Kovacic and N’Golo Kante should keep their places in Lampard’s starting eleven so Ross Barkley may have to settle for a place among the substitutes yet again.

Attack: Tammy Abraham should once again lead the line up front after scoring the winner on Sunday so Michy Batshuayi will be named among the subs. Olivier Giroud is ruled out with an ankle knock.

Willian has been in fine form lately so he’s expected to keep his place on the right wing but we could see a change on the left with Callum Hudson-Odoi coming in for Mason Mount. Christian Pulisic is set to remain out with a thigh problem. 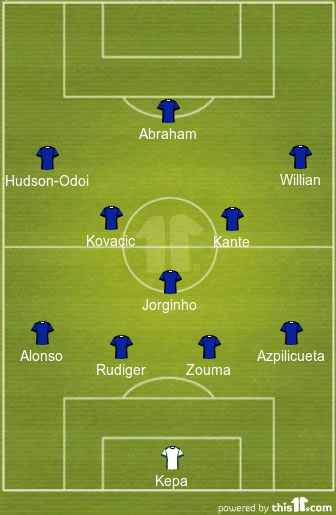