Chelsea take on Burnley at Stamford Bridge on Saturday afternoon. Here is the team we expect Frank Lampard to select for the game:

Chelsea will be looking to continue their decent form when they take on Burnley at Stamford Bridge on Saturday afternoon.

The Blues are unbeaten in their last five matches in all competitions and eased past Nottingham Forest 2-0 in the FA Cup last time out so they should be in confident mood. Lampard’s men are the heavy favourites to win this game with bookmakers offering long odds of 2/5 on a home win so bettors should visit worldnet.net to take advantage of the various promo offers available to ensure they make the most of their money. Chelsea have been inconsistent at home this season so some many fancy Burnley to cause an upset with odds of 13/2 looking tempting.

However, I expect Chelsea to be too strong in the end, so here is the line-up I think Lampard will select:

Goalkeeper: Kepa Arrizabalaga is set for a recall after being rested for the FA Cup win over Nottingham Forest last weekend so Willy Caballero will drop back to the bench.

Defence: We should see Chelsea making plenty of changes in defence as Antonio Rudiger and Kurt Zouma are expected to be given recalls after being rested last time out. Fikayo Tomori and Andreas Christensen are set to drop out.

Cesar Azpilicueta will also come back into the side tomorrow but he may start at left-back with Emerson Palmeiri making way. That would mean Reece James keeping his place on the right side of the back four.

Midfield: Lampard will give N’Golo Kante a recall after he had a well-earned breather against Forest last time out while Jorginho should keep his place in the deep lying playmaker role.

Mateo Kovacic is likely to keep his place in the Chelsea starting eleven so Ross Barkley could be the man to make way after he made his long-awaited return from injury last weekend.

Attack: We’re likely to see wholesale changes in attack with Tammy Abraham recalled to lead the line up front after he didn’t feature against Forest in the FA Cup tie. Michy Batshuayi will drop back to the bench while Olivier Giroud won’t be involved as he looks to secure a move away from west London.

Christian Pulisic has been ruled out of the game with a groin injury so Mason Mount may start on the left with Callum Hudson-Odoi making way. Willian is set for a recall in the Chelsea attack with Pedro dropping to the bench. 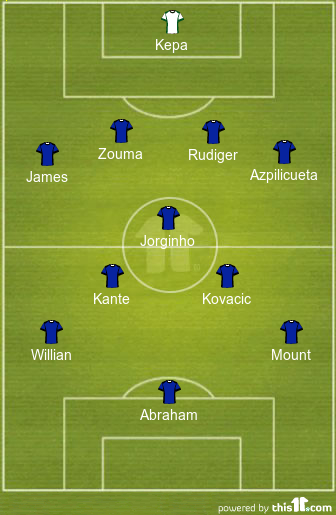