Manchester United take on Liverpool at Anfield on Sunday afternoon. Here is the team we think Ole Gunnar Solskjaer will select for the game:

Manchester United take on Liverpool at Anfield on Sunday afternoon. Here is the team we think Ole Gunnar Solskjaer will select for the game:

Goalkeeper: David De Gea was given a rest for United’s FA Cup third round reply win over Wolves in midweek so the Spaniard will be recalled against Liverpool with Sergio Romero dropping to the bench.

Defence: Luke Shaw is a doubt for the trip to Anfield after picking up a hamstring injury last weekend. Eric Bailly made his return from injury with a run out for the reserves this week but he’s not expected to be involved on Sunday.

Axel Tuanzebe and Marcos Rojo remain unavailable for selection so Man Utd are expected to name an unchanged back four against Liverpool with Harry Maguire and Victor Lindelof starting in the middle of the defence.

Aaron Wan-Bissaka is set to keep his place at right-back while Brandon Williams should get another chance to impress at left-back. Ashley Young won’t be available as he’s joined Inter Milan but Diogo Dalot will be an option for Solskjaer on the bench.

Midfield: Manchester United will continue to be without Paul Pogba as he’s still recovering from ankle surgery while Scott McTominay is also still on the sidelines with a knee ligament injury.

Therefore, I expect Nemanja Matic to continue alongside Fred in midfield against Liverpool with Andreas Pereira named among the Manchester United substitutes on Sunday.

Juan Mata has been excellent in United’s last two games against Norwich and Wolves so he should keep his place in the attacking midfield role with Jesse Lingard named on the bench.

Attack: Marcus Rashford will need a late fitness test after picking up a back injury against Wolves and Solskjaer has hinted the forward could miss the trip to Anfield. However, reports suggest this is just mind-games and Rashford is expected to play through the pain barrier to start against Liverpool.

Anthony Martial will continue to lead the line up front for Man Utd while Daniel James is expected to start on the right wing so Mason Greenwood will have to settle for a place on the bench. 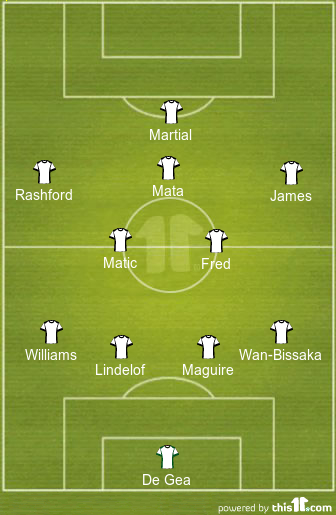