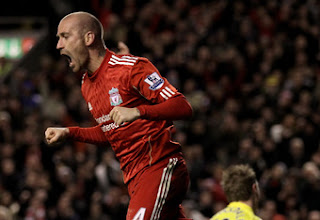 Kenny Dalglish’s Liverpool face up to Man Utd at Anfield on Sunday at 1.30 pm with several injury problems. Martin Kelly is definately out for at least a month following the hamstring injury he picked up in our defeat at West Ham.

Raul Miereles, our chief goal-getter of late, is also a major doubt after picking up a knee injury on Sunday. Kyrgiakos and Daniel Agger are also doubts with head and groin injuries. Fabio Aurelio is also out with a groin strain.

It is unclear wether record-signing, Andy Carroll, will make his long-awaited debut for the Reds, he is still abit short on match-fitness. The biggest problem lies in our midfield. Teams have worked out how to play us, by flooding the centre with hard-working midfielders. If Kenny is to get the job full-time in the Summer then his priority must be a midfield enforcer.

The petulent Mascherano did a great job for us there, but, like Xabi Alonso, he hasn’t been properly replaced. We have a good defence and a potentialy great attack but we need shoring up in the midfield and young Lucas, improved as he has, he is still not the answer.