Chelsea take on Bayern Munich at Stamford Bridge this evening. Here is the team we expect Frank Lampard to select for the game:

Chelsea take on Bayern Munich in the first leg of their Champions League last-16 tie at Stamford Bridge this evening. Here is the team we expect Frank Lampard to select for the game:

Goalkeeper: Kepa Arrizabalaga has been axed as Chelsea’s number one recently and Lampard is showing no sign that he’s ready to give the Spaniard another chance so Willy Caballero is expected to keep the gloves tonight.

Defence: Chelsea deployed a back three to good effect during the win over Tottenham at the weekend so Lampard is being tipped to stick with that system against Bayern Munich. Andreas Christensen should keep his place after playing with a face mask to protect his broken nose at the weekend while Antonio Rudiger is also expected to start.

Cesar Azpilicueta was the third centre-back against Spurs but he may be moved out to the left wing-back role this evening meaning Kurt Zouma could be in-line for a recall against Bayern.

Marcos Alonso was brought in specifically to provide crosses for Olivier Giroud against Tottenham but if the Frenchman is dropped then I expect Alonso to make way with Azpilicueta moving to the wing. That would allow Reece James to keep his place on the right flank.

Midfield: Chelsea will continue to be without N’Golo Kante as the midfielder has been ruled out for around three weeks with a muscle injury and his absence will be a big blow for the Blues.

Jorginho will be deployed in the deep lying playmaker role once again this evening and Mateo Kovacic should keep his place after an excellent performance against Tottenham. Ruben Loftus-Cheek was back in the squad on Saturday after recovering from a serious Achilles injury and he’ll be hoping to feature off the bench against Bayern.

Attack: Tammy Abraham is pushing for a recall after making his comeback off the bench at the weekend having recovered from an ankle injury. Olivier Giroud justified his inclusion after scoring the opening goal against Tottenham but I still think he’ll make way for Abraham tonight.

Callum Hudson-Odoi remains on the sidelines with a thigh injury while Christian Pulisic is also still unavailable due to a lack of fitness so Mason Mount should keep his place in the Chelsea attack.

I think we may see Willian come back in for Ross Barkley after the Brazilian was named on the bench against Spurs while Pedro and Michy Batshuayi will battle for places among the substitutes. 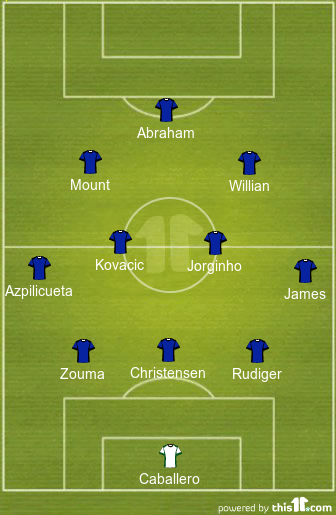