Manchester United take on Derby County at Pride Park on Thursday night. Here is the line-up we think Ole Gunnar Solskjaer will select for the game:

Manchester United take on Derby County in the fifth round of the FA Cup at Pride Park this evening. Here is the line-up we think Ole Gunnar Solskjaer will select for the game:

Goalkeeper: Sergio Romero has played in the majority of cup games so far this season so he’s expected to replace David De Gea between the sticks with the Spaniard left out following his error against Everton last weekend.

Defence: Solskjaer is expected to stick with a back four but he’s likely to freshen things up in defence with Eric Bailly pushing for a recall. Victor Lindelof may be the man to be rested with Harry Maguire keeping his place.

Brandon Williams should be recalled at left-back with Luke Shaw given a breather while Man Utd will be forced into a change at right-back as Aaron Wan-Bissaka has been ruled out with a back problem. Diogo Dalot is in-line to come in this evening.

Axel Tuanzebe and Tim Fosu-Mensah could be included in the squad after building-up their fitness with the U23s but places on the bench is probably the best they can hope for against Derby.

Midfield: Paul Pogba has been stepping-up his recovery from an ankle injury but this game will come too soon for the Frenchman so he remains on the sidelines for the trip to Pride Park.

Scott McTominay has made a successful return to action recently but Solskjaer may want to give him a rest this evening while Nemanja Matic may also be given a breather so we should see changes in midfield.

A slight switch in formation could see Man Utd go with a two-man base in midfield with Andreas Pereira joining Fred in the middle of the park. Bruno Fernandes has made an excellent start to life at United but he should be rested tonight so Juan Mata could be recalled in the advanced midfield role.

Attack: Man Utd have been dealt a blow as Daniel James will miss tonight’s game with a muscle problem that kept him out of the Everton game at the weekend. Mason Greenwood should keep his place on the right wing.

Anthony Martial is expected to be rested so Odion Ighalo could come in to lead the line up front while Jesse Lingard may get a chance to impress from the start having struggled for regular game-time recently.

Marcus Rashford is slowly stepping-up his rehabilitation from a back injury as he’s now doing gym work but the forward is still several weeks away from being in contention so he’ll miss out once again this evening. 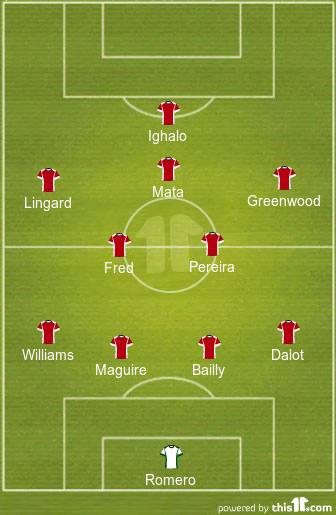