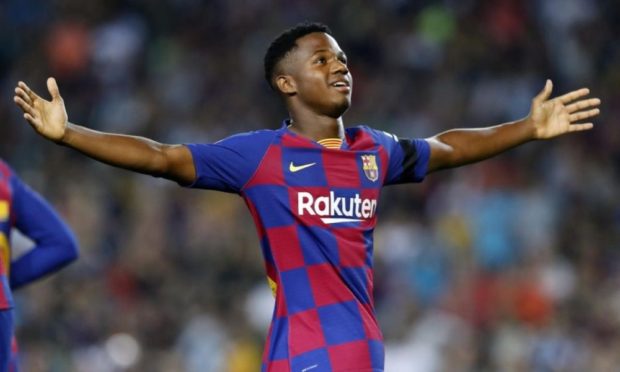 Manchester United are preparing a huge second offer for Ansu Fati after Barcelona rejected their opening bid worth close to £90m, according to reports in Spain via TeamTalk.

Ole Gunnar Solskjaer is gearing-up for a busy summer in the transfer market as he looks to turn United back into title challengers again and the Norwegian coach is reportedly hoping to sign at least one top class attacker.

Jadon Sancho has widely been touted as Man Utd’s prime target but with Borussia Dortmund demanding mega money for the England winger, recent reports have suggested Fati is emerging as a serious alternative.

It appears United have stepped-up their interest as TeamTalk are citing a report from Sport that claimed on Monday the Red Devils had tabled an opening offer worth £89.9m [€100m] for the Barcelona teenager.

The Spanish outlet provided an update in Wednesday’s edition of their newspaper that, according to TeamTalk, claims the Catalan giants have moved to swiftly reject Man Utd’s advances for Fati.

However, it doesn’t look like Solskjaer will give up without a fight as the report suggests United are ready to submit an improved offer that would see the Manchester outfit pay ‘dizzying figures’ to land the Spanish U21 international.

Man Utd may have to significantly increase their offer if they want to get a deal agreed as Sport claims Fati’s release clause is set at £152.8m [€170m] and Barcelona are adamant they won’t sell for anything less. The report goes on to say that Barca are aware of United’s interest but are confident Fati will remain at the Nou Camp beyond this summer.

The teen sensation came through the youth ranks at Barcelona having joined their famed La Masia academy aged 10 and he broke into the first team set-up this season, scoring 4 times in just 7 La Liga starts.

The 17-year-old is undoubtedly one of the most exciting talents in world football and the youngster – who can play anywhere across the front three – would be an exciting addition to United’s squad if they could somehow lure him to Old Trafford.

If these reports are accurate, Man Utd are ready to pay big money to land Fati but I don’t see them triggering his £152.8m release clause so a deal looks unlikely to happen this summer. Therefore, Sancho remains the most likely marquee signing for United.