Chelsea can tighten their grip on fourth place with a win when they take on Aston Villa at Villa Park on Sunday afternoon. Here is the team we expect Frank Lampard to select for the game:

Goalkeeper: Kepa Arrizabalaga played his way back into Lampard’s starting eleven just before the break so I expect the Spaniard to keep the gloves this weekend with Willy Caballero on the bench.

Defence: Chelsea will be without Fikayo Tomori as the defender has been ruled out for up to 10 days with a knock. Kurt Zouma was in favour back in March so the Frenchman could keep his place alongside Antonio Rudiger in the middle of the Chelsea back four at Villa. That means Andreas Christensen may have to settle for a place among the substitutes.

If Lampard plays a back four then Cesar Azpilicueta is expected to start at right-back with Reece James missing out. Marcos Alonso had forced his way into Lampard’s side before football was suspended so it will be interesting to see if he keeps his place this weekend. I expect we’ll see the Spaniard starting at left-back with Emerson Palmeiri missing out.

Midfield: Chelsea have been able to get some key players fit again during the break and N’Golo Kante is one of those men who’ve taken advantage of the hiatus. The midfielder was out with a groin injury in March but is now fully fit and should start at Villa Park.

Kante could be deployed in the holding role as Jorginho is ruled out through suspension having picked up his 10th booking of the season during the 4-0 win over Everton last time out.

Mateo Kovacic has recovered from an Achilles injury that ruled him out of the game against the Toffees so he should start in midfield meaning Ross Barkley may make way. Youngster Billy Gilmour had broken into the first team in March but he may find himself back on the bench on Sunday with Mason Mount getting the nod in the middle of the park.

Ruben Loftus-Cheek is back in contention after regaining full fitness following an injury-plagued season but Chelsea will need to ease him back into action as he’s played a limited amount of games over the past year.

Attack: Chelsea will welcome Tammy Abraham back into the fold as he’s recovered from an ankle injury during the break. The striker should be recalled to start up front meaning Olivier Giroud will drop back to the bench.

Christian Pulisic is also back to full fitness and he could start on the left side of the Chelsea attack. Pedro is the man most likely to make way with Willian keeping his place despite continued doubts over his future at the club.

Callum Hudson-Odoi is set to miss the trip to Aston Villa due to a lack of match fitness having recently recovered from a muscle problem that he picked up in training but Michy Batshuayi could be included in the squad. 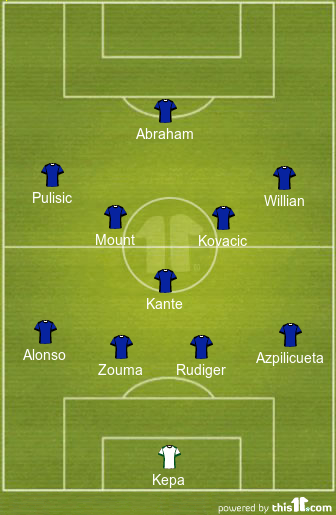