Liverpool take on Crystal Palace at Anfield on Wednesday night. Here is the team we expect Jurgen Klopp to select for the game:

Goalkeeper: Alisson Becker showed once again why he’s one of the best goalkeepers on the planet with a number of important saves during Liverpool’s 0-0 draw at Everton so the Brazilian is certain to keep his place tomorrow.

Defence: Liverpool have been handed a boost as Klopp confirmed today that Andrew Robertson is back in full training and should be available for selection against Palace. The Scot missed the trip to Goodison Park with a minor knock but should return at left-back on Wednesday night.

James Milner will be the man to make way but he’s been ruled out anyway after picking up a hamstring injury against Everton. Trent Alexander-Arnold will keep his place at right-back.

Joel Matip started at the weekend but he sustained a foot injury in the second half and will miss out against Palace. Dejan Lovren looked suspect during his cameo at Goodison but I think Joe Gomez will be the man recalled to start alongside Virgil van Dijk.

Midfield: Naby Keita put-in an impressive performance against the Toffees but Klopp may not want to start him again so soon as the Guinean international has endured a frustrating time with injuries this season.

Therefore, Gini Wijnaldum is expected to be recalled in midfield while Jordan Henderson and Fabinho should keep their places meaning Alex Oxlade-Chamberlain may have to settle for a place among the substitutes.

Attack: Liverpool star Mohamed Salah wasn’t risked against Everton after missing training with a knock last week. However, the Egyptian international trained fully today and is set for a recall tomorrow.

Takumi Minamino – who made a rare Premier League start on Sunday evening – is the man set to drop out as Sadio Mane should keep his place in the Liverpool front three against Palace.

Roberto Firmino should also lead the line up front once again so Divock Origi will have to settle for a place among the subs. Xherdan Shaqiri remains on the sidelines with an on-going calf issue. 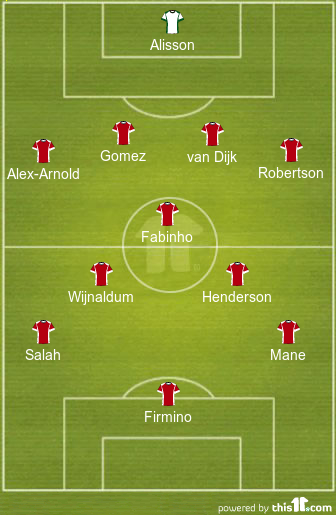