Jorginho should return when Chelsea take on Manchester City at Stamford Bridge. This is our predicted team

Chelsea take on Manchester City at Stamford Bridge on Thursday night. Here is the team we expect Frank Lampard to select for the game:

Goalkeeper: Kepa Arrizabalaga played his way back into Lampard’s starting eleven just before football was suspended and he’s kept his place since the restart so Willy Caballero will have to settle for a place on the bench.

Defence: Chelsea could freshen things up in defence with Reece James pushing to start at right-back. That would see Cesar Azpilicueta switching to the left side of the back four and Marcos Alonso making way.

Antonio Rudiger should keep his place in the middle of defence but we may see Kurt Zouma given a recall if Lampard wants to mix it up during this busy period. Andreas Christensen could therefore find himself back on the bench.

Fikayo Tomori is set to miss out with a muscle problem that kept him out of the win at Aston Villa while Emerson Palmeiri is expected to be on the bench once again.

Midfield: Chelsea will welcome Jorginho back into the squad after he served his suspension at the weekend. The Italian is expected to be given an immediate recall so Lampard will have to decide who to drop.

N’Golo Kante is almost certain to keep his place in the middle of the park while Mateo Kovacic should have done enough to retain his spot. Therefore, Ruben Loftus-Cheek is the man most likely to make way as Lampard has already said he doesn’t want to push the youngster too hard following a frustrating time with injuries.

Billy Gilmour is another option for Chelsea and he’ll be hoping to feature after impressing during the win over Everton recently but I think the youngster will have to settle for a place among the substitutes against Man City.

Attack: Olivier Giroud was on the score-sheet at the weekend but Tammy Abraham is pushing for a recall and I think he’ll come in against City meaning Giroud will drop to the bench.

Willian and Pedro have both signed short-term deals to remain with Chelsea until the end of the season but the duo may have to make-do with places among the subs tomorrow.

Mason Mount could could keep his place in attack while Christian Pulisic is expected to be recalled to the starting eleven after grabbing the winner off the bench against Villa last time out.

Callum Hudson-Odoi remains a doubt for the visit of Man City due to an ankle injury that kept him out of the trip to Villa Park so a place on the bench is probably the best he can hope for. 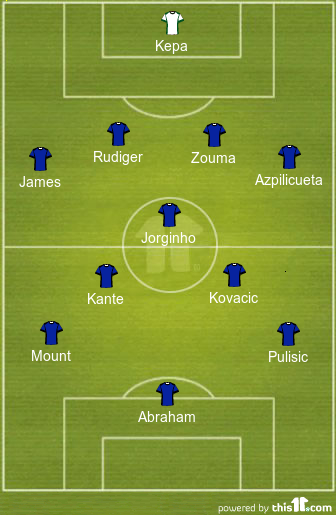