Manchester United take on Brighton at the Amex Stadium on Tuesday evening. Here is the line-up we think Ole Gunnar Solskjaer will select for the game:

Goalkeeper: David De Gea was rested for the FA Cup win at Norwich City on Saturday but the Spaniard should be recalled tomorrow with Sergio Romero making way.

Defence: Victor Lindelof was given the night off at Carrow Road last time out but he’s expected to be recalled to start alongside Harry Maguire so Eric Bailly will be the man to drop to the bench.

Aaron Wan-Bissaka is in-line for a recall at right-back with Diogo Dalot dropping out after making a rare start in the FA Cup at the weekend. Luke Shaw has started in each of Man Utd’s last 14 games so he could be given a breather tomorrow. However, Solskjaer has hinted he’ll stick with Shaw so Brandon Williams will have to settle for a place among the subs once again.

Midfield: Manchester United are set to welcome Paul Pogba back into the starting eleven after he was used as a substitute at the weekend. However, the Frenchman may be deployed in a more advanced role.

Scott McTominay started against Norwich so he could be rested as Solskjaer looks to rotate. Nemanja Matic is in contention to start in the middle of the park so he could line-up alongside Fred at Brighton tomorrow evening.

Bruno Fernandes looked a little tired on Saturday after starting United’s last four games so I wouldn’t be surprised to see the Portuguese international rested tomorrow with Pogba in the advanced midfield role.

Attack: Odoin Ighalo was back in the United team at the weekend and he got himself on the score-sheet. However, I think Ighalo will find himself back on the bench as Anthony Martial is set for a recall and he’ll be hoping to build on his superb hat-trick that he scored against Sheffield United last week.

Marcus Rashford is also set to be recalled in the Man Utd attack while Daniel James could get the nod over Mason Greenwood on the right-wing. Jesse Lingard and Juan Mata didn’t do enough to keep their places after failing to impress at Norwich in the FA Cup so they’re expected to make way tomorrow. 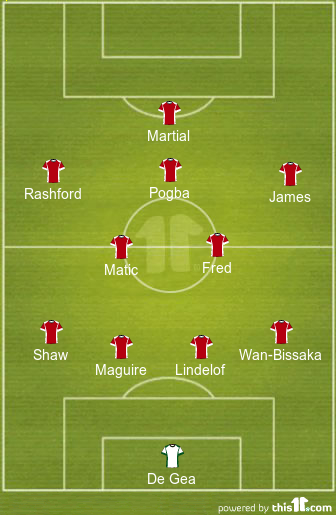