Chelsea take on Crystal Palace at Selhurst Park on Tuesday night. Here is the team we expect Frank Lampard to select for the game:

Goalkeeper: Kepa Arrizabalaga is back in favour and kept a clean sheet against Watford at the weekend so he’s expected to keep his place tomorrow with Willy Caballero on the bench.

Defence: Chelsea will continue to be without Fikayo Tomori as he’s suffered a set-back in his recovery from a muscle problem. Antonio Rudiger was rested against Watford but I think we’ll see him recalled for the trip to Palace.

Andreas Christensen appears to be Lampard’s favoured partner for Rudiger right now as he’s been a regular starter recently so Kurt Zouma is likely to drop to the Chelsea bench at Selhrs Park.

Marcos Alonso was dropped against Watford and Cesar Azpilicueta put-in a sold performance at left-back so I expect him to continue in that role tomorrow with Reece James at right-back.

Midfield: Chelsea have been dealt a fresh blow with the news that N’Golo Kante has been ruled out for around a week with a thigh injury that he sustained against Watford.

Mateo Kovacic is also out of the Palace game with an Achilles injury that he sustained during the defeat to West Ham last week so Jorginho is almost certainly going to be recalled tomorrow having not started any of Chelsea’s last five games.

Ross Barkley was on the score-sheet again at the weekend so I expect him to keep his place in midfield while Mason Mount could also start in the middle of the park after another positive show on Saturday night.

Billy Gilmour is another option for Lampard and he’ll be hoping to feature at some point but I think he’ll have to settle for a place on the bench alongside Ruben Loftus-Cheek against Crystal Palace.

Attack: Willian continued his fine form with another goal at the weekend and the Brazilian international should keep his place on the right side of the Chelsea attack.

Olivier Giroud was also among the goals against Watford but Lampard may want to freshen things up in attack so Tammy Abraham could come in to lead the line up front.

Christian Pulisic has hit some form lately and he should keep his place on the left wing meaning the likes of Callum Hudson-Odoi and Pedro will battle for places on the bench. 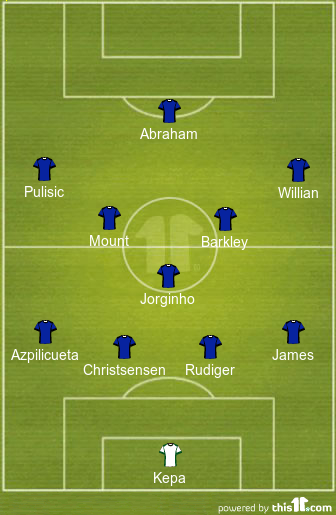