– Jorginho should be recalled when Chelsea take on Sheffield United

Chelsea take on Sheffield United at Bramall Lane on Saturday evening. Here is the team we expect Frank Lampard to select for the game:

Goalkeeper: Kepa Arrizabalaga has had his fair share of criticism this season and questions were asked of him again in midweek but I still think he’ll keep his place in goal tomorrow.

Defence: Chelsea have looked disorganised at the back too many times this season and they were lucky to only concede twice at Crystal Palace on Tuesday night so I wouldn’t be surprised to see Lampard make at least one change against Sheffield United.

Antonio Rudiger hasn’t featured much lately but I can see him being recalled to start in the middle of defence tomorrow. Kurt Zouma could be the man to keep his place with Andreas Christensen making way.

Marcos Alonso is pushing for a recall after being dropped in recent games but I think Lampard will stick with Cesar Azpilicueta at left-back at Bramall Lane so Reece James should continue at right-back.

Midfield: Chelsea have been dealt a blow with the news that Billy Gilmour is facing up to four months on the sidelines after undergoing surgery on a knee injury that he sustained during the 3-2 win at Palace.

N’Golo Kante is also still unavailable after suffering a thigh injury against Watford last week so Jorginho is expected to be recalled in the holding role after making a real impression off the bench in midweek.

Mateo Kovacic is also back in contention after recovering from an Achilles injury that’s kept him out recently and he could be recalled to start in midfield with Ross Barkley making way.

Ruben Loftus-Cheek is pushing for a recall after being named among the subs in recent matches but I think Mason Mount will keep his place in the middle of the Chelsea midfield against Sheffield United.

Attack: Tammy Abraham ended his scoring drought after finding the back of the net against Palace so he’ll be hoping to earn a recall. However, Olivier Giroud was also on target in that match and has been Lampard’s preferred choice up front recently so I think the Frenchman will get the nod.

Willian has been in excellent form lately so he should keep his place on the right side of the Chelsea attack while Christian Pulisic is also expected to start after scoring another goal in midweek.

That means Pedro and Callum Hudson-Odoi may have to settle for places among the subs this weekend but they’ll be good options for Lampard to have if needed. 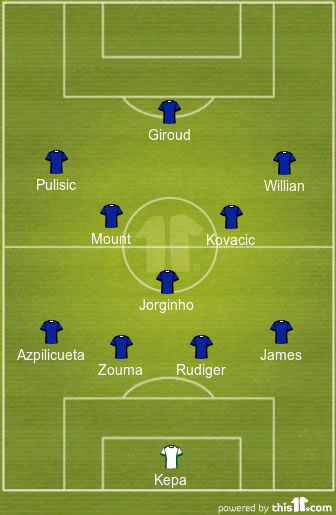