Chelsea take on Norwich City at Stamford Bridge on Tuesday evening. Here is the team we expect Frank Lampard to select for the game:

Goalkeeper: Kepa Arrizabalaga was once again criticised for his part in Chelsea’s defeat at Sheffield United on Saturday but I still think the Spaniard will keep his place ahead of Willy Caballero tomorrow night.

Defence: Chelsea are expected to shuffle their pack in defence after the horror-show at Bramall Lane and Andreas Christisen is a slight doubt after being forced off with an ankle injury against the Blades. Antonio Rudiger is on stand-by for a recall and he could line-up alongside Kurt Zouma in the middle of defence against Norwich.

Marcos Alonso is also pushing for a recall after being dropped in recent games and I wouldn’t be surprised to see him starting at left-back tomorrow. Cesar Azpilicueta could therefore move across to right-back with Reece James dropping out.

Midfield: Chelsea have been dealt a blow as N’Golo Kante has been ruled out once again after failing to recover from a thigh injury. Billy Gilmour is also still on the sidelines after undergoing knee surgery last week.

Jorginho was recalled in the holding role against Sheffield United and I expect him to retain his place tomorrow but otherwise Lampard could decide to freshen things up in the middle of the park.

Mateo Kovacic is also back in contention after recovering from an Achilles injury and he could come in for Ross Barkley while Ruben Loftus-Cheek may be recalled with Mason Mount dropping to the bench.

Attack: Tammy Abraham failed to take his opportunity to cement his place up front after a disappointing showing at the weekend so I expect Olivier Giroud to be recalled to lead the line for Chelsea.

Willian has been playing well recently so I think the Brazilian will keep his place on the wing tomorrow while Christian Pulisic could also start despite a poor display against Sheffield United.

That means Callum Hudson-Odoi, Pedro and Michy Batshuayi may have to settle for places among the subs against Norwich. 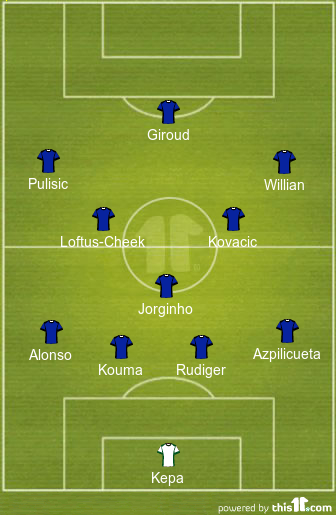