Chelsea take on Liverpool at Anfield on Wednesday evening. Here is the team we expect Frank Lampard to select for the game:

Goalkeeper: Willy Caballero did well during Chelsea’s FA Cup semi-final win over Manchester United at the weekend but number one goalkeeper Kepa Arrizabalaga is still expected to be recalled against Liverpool.

Defence: Chelsea deployed a back three on Sunday evening but Lampard is likely to switch to a back four for the trip to Anfield tomorrow night with Cesar Azpilicueta moving to left-back.

That would allow Reece James to drop to right-back while Kurt Zouma is expected to keep his place alongside Antonio Rudiger in the middle of defence with Andreas Christensen and Fikayo Tomori among the substitutes.

Midfield: The switch in formation could see Marcos Alonso dropping out after he played at left wing-back against United but Jorginho should keep his place in the holding role in midfield.

Chelsea have received a blow after N’Golo Kante was ruled out of the trip to Liverpool with an on-going thigh injury while Billy Gilmour is also still out injured following knee surgery.

Mateo Kovacic should keep his place in the middle of the park for Chelsea and we might see Mason Mount drop back into a central midfield role. The youngster played higher up the pitch against United and got himself on the score-sheet but he may move back into midfield tomorrow night.

Ruben Loftus-Cheek is another option for Lampard if he wants to freshen things up but I think the Blues boss will start with Jorginho, Mount and Kovacic against Liverpool meaning Loftus-Cheek will remain on the bench.

Attack: Chelsea are likely to recall Christian Pulisic after he wasn’t risked against Man Utd due to a minor muscle issue while Willian should keep his place against Liverpool as he’s been in fine form lately.

Olivier Giroud opened the scoring in the FA Cup semi-final at Wembley so the Frenchman is favourite to lead the line up front tomorrow night meaning Tammy Abraham will remain on the bench along with Callum Hudson-Odoi and Pedro. 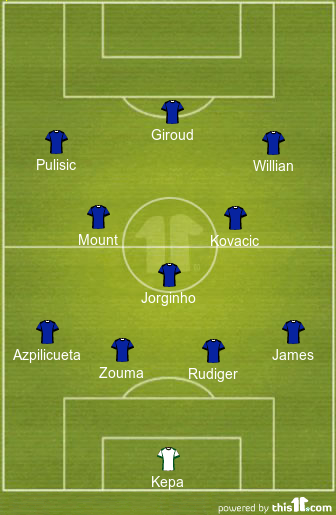