Liverpool take on Chelsea at Anfield in their final home game of the season this evening. Here is the team we expect Jurgen Klopp to select for the game:

Goalkeeper: Alisson Becker made a rare mistake during Liverpool’s defeat to Arsenal last time out but the Brazilian has been otherwise faultless since joining the club so he’s certain to keep his place in goal against Chelsea.

Defence: If Alisson’s error was a shock then Virgil van Dijk’s was almost unbelievable as the Dutchman gifted Arsenal their equaliser last week. However, van Dijk will be looking to bounce back this evening as he marshals the Liverpool back four once again.

Dejan Lovren is available for selection after returning to fitness recently but he’ll have to settle for a place on the bench as Joe Gomez should keep his place alongside van Dijk in defence.

Trent Alexander-Arnold should keep his place at right-back while Andrew Robertson will no doubt start on the left side of the back four but Joel Matip won’t take any part in Liverpool’s final two matches due to a foot injury.

Midfield: Liverpool are without skipper Jordan Henderson for the Chelsea game as he’s been ruled out for several weeks with a knee injury while James Milner remains a doubt with a niggling hamstring injury.

Milner will be assessed before his availability is determined but a place on the bench is probably the best he can hope for even if he’s passed fit.

Alex Oxlade-Chamberlain failed to take his opportunity to shine against Arsenal last week so I expect he’ll drop to the bench with Naby Keita recalled. The 25-year-old was named on the bench at the Emirates but should start in midfield tonight.

Fabinho should keep his place in the holding role for Liverpool while the final midfield place is likely to go to Gini Wijnaldum so youngster Curtis Jones will have to make-do with a place among the substitutes.

Attack: Liverpool will be wanting to end their season in style and pick up the Premier League trophy off the back of a win in their final home game of the campaign so I can’t see Klopp leaving out any of his star attackers.

Mohamed Salah still has an outside chance of winning the Golden Boot so he’ll be desperate to get on the score-sheet while Sadio Mane should also keep his place on the opposite flank.

Roberto Firmino is expected to lead the line up front for Liverpool against Chelsea tonight so the likes of Divock Origi, Takumi Minamino, Harvey Elliott and Xherdan Shaqiri will all be on the bench. 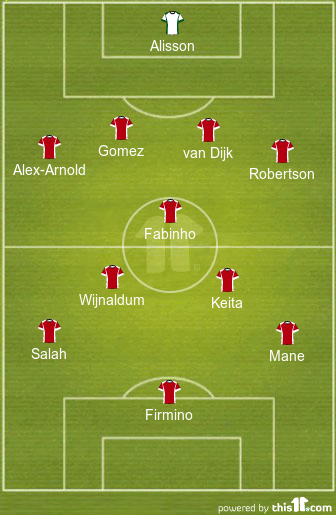