Chelsea take on Wolves at Stamford Bridge on the final day of the season tomorrow. Here is the team we expect Frank Lampard to select for the game:

Goalkeeper: Kepa Arrizabalaga has received heavy criticism in recent weeks but Lampard seems to have stood-by his number one so I expect the Spaniard to start between the sticks tomorrow with Willy Caballero on the bench.

Defence: Chelsea have deployed a back three in the last two matches but have conceded six goals and look far more solid with a traditional flat back four so I wouldn’t be surprised to see Lampard switching formations against Wolves.

That would see Cesar Azpilicueta moving to left-back with Marcos Alonso likely to be the man to drop out of the starting eleven and Reece James would drop back to start at right-back.

Kurt Zouma appears to be ahead of Andreas Christensen in the Chelsea pecking order at centre-back so the Frenchman should keep his place alongside Antonio Rudiger in defence tomorrow. Fikayo Tomori would join Christensen among the substitutes.

Midfield: Chelsea will make a late check on N’Golo Kante but the midfielder isn’t expected to be fit having missed the past few matches with a niggling thigh injury so he’ll be a big miss for the Blues.

Mason Mount has played a lot of football lately and although he’s been playing well, Lampard might want some fresh legs in midfield so Ruben Loftus-Cheek could be drafted in alongside Kovacic and Jorginho.

Attack: Chelsea are likely to recall Christian Pulisic after he made a terrific impact off the bench with a goal and an assist during the 5-3 defeat at Liverpool on Wednesday night.

Willian should keep his place on the right side of attack while Olivier Giroud has played his way into Lampard’s starting eleven and was on target again in midweek so I expect him to keep his place up front.

That means Tammy Abraham will have to settle for a place among the Chelsea substitutes where he’ll be joined by Callum Hudson-Odoi and Pedro. 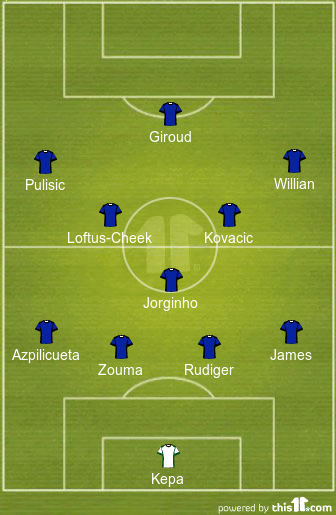