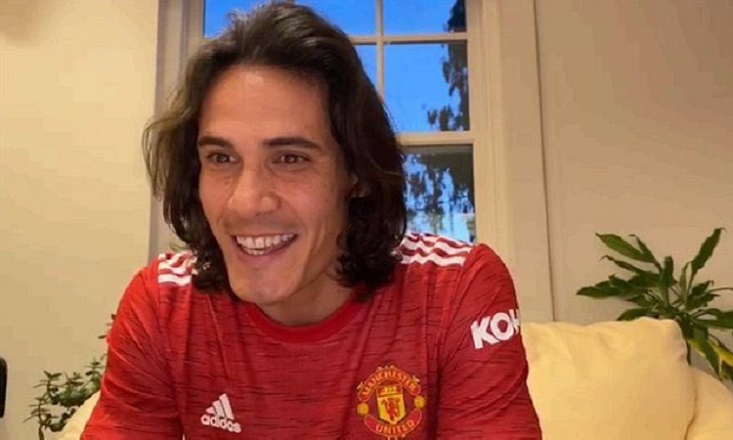 Edinson Cavani has been snapped wearing the Manchester United home kit for the first time since completing his move to Old Trafford.

The Uruguayan international was a free agent this summer after leaving Paris Saint-Germain when his contract expired at the end of last season following seven hugely successful years in the French capital.

Cavani was linked with a number of top clubs including the likes of Juventus, Atletico Madrid, Real Madrid and Benfica but emerged as a serious target for Manchester United during the closing days of the summer window.

Ole Gunnar Solskjaer was desperate to strengthen his attacking options for what will be a gruelling campaign and the Norwegian coach wanted another top class striker to support Anthony Martial up front.

A deal was agreed with Cavani last weekend and the 33-year-old completed his free transfer move to Old Trafford on deadline day after reportedly signing an initial one-year contract worth around £250,000-a-week.

The striker hasn’t done an official photo-shoot in his new club colours yet but the former Napoli hitman did release a video showing him working out at home in the Man Utd training kit earlier this week.

However, we’ve now finally got a glimpse of Cavani in the United home shirt as a photo of him wearing the new red kit has been doing the rounds on social media this evening.

The South American’s debut for Manchester United is expected to be delayed as he’s required to self-isolate for 14 days following his arrival from France last Sunday. Cavani left PSG in June and hasn’t been part of an ‘elite athlete bubble’ so doesn’t qualify for exemption.

It means the striker cannot train with his new team mates yet and is expected to miss United’s trip to Newcastle on October 17th. His fitness will be assessed at Carrington when he is finally able to train but it remains to be seen whether he’ll be considered fit enough to face former club PSG in the Champions League on October 20.