Chelsea get back to Premier League action when they take on Southampton at Stamford Bridge on Saturday afternoon. Here is the team we expect Frank Lampard to select for the game:

Goalkeeper: Chelsea have been dealt a blow after Lampard confirmed this afternoon that Edouard Mendy has been ruled out this weekend due to a thigh injury so Kepa Arrizabalaga is set to be recalled between the sticks.

Defence: Lampard will also be missing a key player in defence as Thiago Silva won’t be available having returned late from international duty with Brazil. Andreas Christensen could get the nod ahead of Fikayo Tomori to start alongside Kurt Zouma in the middle of the back four.

Ben Chilwell has been passed fit to take his place in the squad after recovering from a minor ankle problem and he should keep his place at left-back. However, we could see a change on the opposite flank with Reece James coming in for Cesar Azpilicueta.

Midfield: Chelsea will assess N’Golo Kante ahead of the game as he’s carrying a muscle problem so Mateo Kovacic could be in-line for a recall if the Frenchman is ruled again tomorrow.

Jorginho could keep his place in the middle of the park after scoring two penalties during the win over Crystal Palace last time out but Billy Gilmour remains on the sidelines as he continues to recover from a knee injury.

Attack: Lampard has plenty of options in attack as Christian Pulisic has been declared fit after returning to full fitness and he could start on the left wing against Southampton this weekend.

Hakim Ziyech is also in the squad after regaining fitness following injury but Lampard has suggested this game is too soon for him to start so he’ll hope to make his debut off the bench.

Mason Mount could be recalled to start ahead of Callum Hudson-Odoi on the right side of attack with Kai Havertz keeping his place in the central attacking midfield role.

Tammy Abraham and Olivier Giroud are options for Lampard up front but we could see summer signing Timo Werner leading the line as he looks to register his first competitive goal since arriving from RB Leipzig. 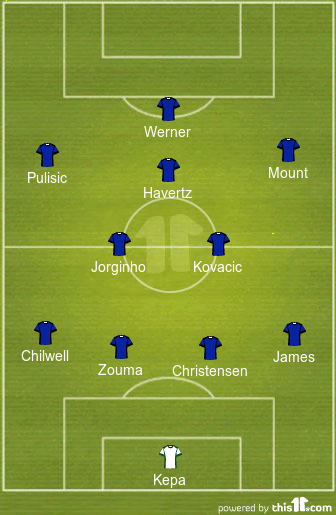