The Reds are heading into this game on the back of a 2-1 win against Sheffield United in the Premier League, and Jurgen Klopp will be hoping to pick their second win in this competition having beaten Ajax 1-0 in the group opener. Here is the team we expect Klopp to select for the game:

Goalkeeper: Liverpool fans breathed a sigh of relief to see Alisson returning to action in the last match following his shoulder injury. Adrian started against Ajax, but the Brazilian is all set to replace him.

Defence: Klopp has revealed in the press conference today that Joel Matip is unlikely to feature as he steps up his recovery. With Virgil van Dijk out for an indefinite period of time, and Matip still not match fit, the onus of responsibility falls upon Joe Gomez and makeshift centre-back, Fabinho, once again.

Trent Alexander-Arnold will occupy his customary right-back slot but Andy Robertson could get a breather, with Klopp likely to use James Milner in his place. Summer signing Kostas Tsimikas is a long-term absentee.

Midfield: Against Sheffield, Klopp changed the formation to 4-2-3-1 to accommodate Diogo Jota in the Liverpool side. He is likely to revert to a three-man midfield on Tuesday. Both Naby Keita and Thiago Alcantara are still not fully fit and are likely to be rested.

Thus, skipper Jordan Henderson and Gini Wijnaldum are set to continue in midfield, with 19-year-old Curtis Jones likely to be given another opportunity to impress.

Forward: The front three of Mohamed Salah, Roberto Firmino and Sadio Mane could be dropped to the bench to keep themselves fresh with games coming thick and fast.

In place of Firmino, the versatile Takumi Minamino could be asked to replicate the Brazilian’s role, with Jota and Xherdan Shaqiri occupying the left and right flanks for Liverpool. The trio impressed in their cameo roles against Ajax, and deserve a chance to be in the starting line-up. 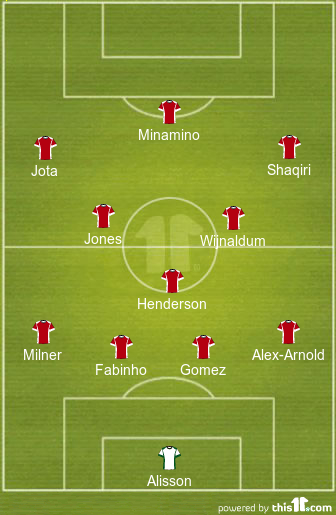