Chelsea take on Sheffield United at Stamford Bridge on Saturday evening. Here is the team we expect Frank Lampard to select for the game:

Goalkeeper: Edouard Mendy has been in fine form lately for Chelsea and is certain to keep his place between the sticks so Willy Caballero should once again be on the bench.

Defence: Chelsea appear to have found a settled back four and Kurt Zouma has enjoyed an excellent start to the campaign so he should continue alongside Thiago Silva in the middle of defence tomorrow.

Ben Chilwell has also settled-in well since moving to West London so he’ll keep his place ahead of Marcos Alonso at left-back but we may see Lampard freshen things up at right-back with Cesar Azpilicueta coming in for Reece James.

Midfield: Chelsea suffered no fresh injury concerns following Wednesday night’s Champions League win over Rennes so N’Golo Kante is expected to line-up alongside Jorginho in the middle of the park once again tomorrow.

Mateo Kovacic has fallen out-of-favour recently so the Croatian international may have to settle for a place among the substitutes against Sheffield United while Billy Gilmour is still working his way back to full fitness.

Kai Havertz remains unavailable for selection after testing positive for COVID-19 which is a big blow so Mason Mount should keep his place in the attacking midfield role this weekend.

Attack: Timo Werner was on target with two well taken penalties in midweek so he should keep his place in the Chelsea attack. The German international is likely to start on the left as Christian Pulisic won’t be risked tomorrow having picked up a minor hamstring issue during the pre-match warm up against Burnley.

Hakim Ziyech has made a terrific start to life in the Premier League and I expect the Moroccan international to keep his place in attack which means Callum Hudson-Odoi will be named among the substitutes. 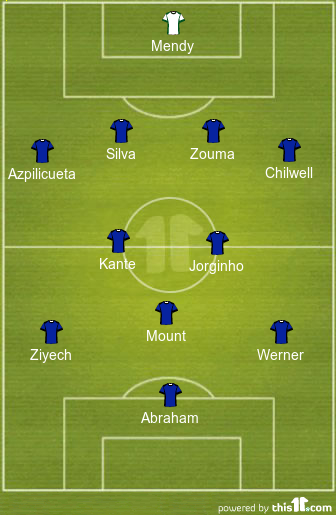