Chelsea are in France to take on Rennes in the group stages of the Champions League on Tuesday night. Here is the team we expect Frank Lampard to select for the game:

Goalkeeper: Edouard Mendy is expected to keep his place between the sticks with Kepa once again having to make-do with a place on the bench.

Defence: Chelsea are set to welcome Thiago Silva back into the squad. The Brazilian was rested for the win over Newcastle at the weekend following his exploits during the international break but he’s travelled to France and Silva should return in defence.

Ben Chilwell should once again start at left-back ahead of Emerson while Kurt Zouma is likely to keep his place meaning Antonio Rudiger will be the man to drop out of the Chelsea back four. We could also see a change at right-back with Cesar Azpilicueta coming in for Reece James.

Midfield: Lampard is expected to make a change in midfield with Jorginho pushing for a recall. The Italian has started on the bench for Chelsea’s last two games but I think we’ll see him recalled against Rennes tomorrow.

N’Golo Kante should keep his place in the middle of the park so Mateo Kovacic is the man most likely to make way. Kai Havertz is back in contention after building up his fitness so the German could start on Tuesday evening.

Mason Mount has been impressing in recent weeks but Lampard may opt to give the England international a breather ahead of a hectic period.

Attack: Christian Pulisic has been working on his fitness in training over the international break but he’s still not ready to return so has been left back in London to continue his rehab.

Therefore, Timo Werner is likely to continue on the left flank with Tammy Abraham keeping his place up front. That means Olivier Giroud will have to settle for a place among the substitutes once again.

Callum Hudson-Odoi is pushing for a recall to the Chelsea starting eleven but I think Lampard will stick with Hakim Ziyech on the right side of his attack so the England youngster will have to make-do with a spot on the bench. 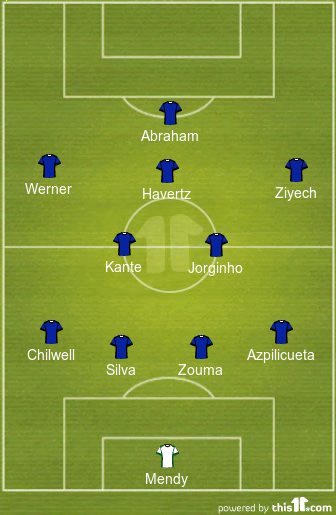