Tottenham will take on Chelsea at Stamford Bridge on Sunday afternoon. This is the team we expect Jose Mourinho to select for the game:

Goalkeeper: Hugo Lloris missed the Europa League win over Ludogorets on Thursday night with a minor knock but the Frenchman is expected to be fit to return this weekend meaning Joe Hart will make way.

Defence: Tottenham are set to be without Toby Alderweireld as the centre-back picked up a groin injury during the win over Manchester City last weekend. Joe Rondon is an option for Mourinho but we think Davinson Sanchez will keep his place. Eric Dier should be recalled to start alongside Sanchez after being rested last night so Japhet Tangana will drop out.

Sergio Reguilon is pushing for a recall at left-back against Chelsea so Ben Davies is likely to make way while Serge Aurier could come in for Matt Doherty at right-back as the Irishman has only just returned from injury.

Midfield: Harry Winks made a goalscoring return for Spurs last time out but he’s still expected to drop to the bench with Pierre-Emile Hojbjerg recalled in midfield after he was rested against Ludogorets.

Moussa Sissoko is also set to come back into the Tottenham starting eleven with Tanguy Ndombele moving into a more advanced midfield role. That means Dele Alli is the man set to make way after starting in the Europa League clash.

Forward: Tottenham will recall their big guns up front as Harry Kane is set to come in after being given a breather last night while Hueng-min Son should also be recalled after being rested against Ludogorets.

Carlos Vinicius will drop back to the bench despite Tottenham’s summer signing scoring a brace in Europe while Lucas Moura is also expected to make way against Chelsea.

Steven Bergwijn missed the Ludogorets game with a minor knock but Mourinho is confident he’ll be passed fit to return so Gareth Bale may have to settle for a place among the substitutes at Stamford Bridge. 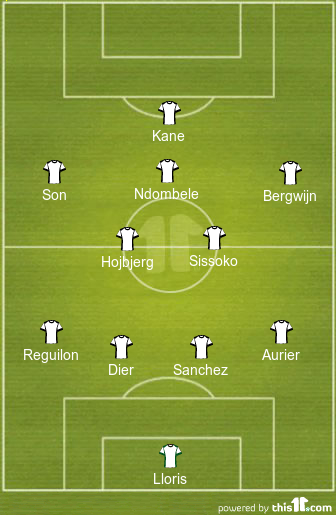