Chelsea are in Spain to take on Sevilla in the Champions League on Wednesday night. The Blues have already qualified for the knockout rounds and Frank Lampard has confirmed he’ll make changes tomorrow.

Here is the team we expect Lampard to select for the game:

Goalkeeper: Edouard Mendy should keep goal once again so Kepa Arrizabalaga will have to settle for a place on the bench.

Defence: Chelsea are expected to make at least two changes in defence with Cesar Azpilicueta coming in at right-back in order to give Reece James a rest while Thiago Silva will also be given a breather.

Antonio Rudigier is likely to get the nod ahead of Andreas Christensen so the German international should line-up alongside Kurt Zouma in the middle of the back four. Emerson Palmeiri could be in Lampard’s thoughts at left-back but we think Ben Chilwell will keep his place against Sevilla.

Midfield: Lampard is set to freshen things up in midfield with N’Golo Kante expected to be rested. Jorginho could therefore be recalled to start in the middle of the park after being overlooked for the 0-0 draw with Tottenham last time out.

Mason Mount is enjoying a fine run in the Chelsea first team so he could keep his place but Mateo Kovacic might get a rest with Kai Havertz recalled to start in Spain after being on the bench at the weekend.

Billy Gilmour will return to the squad after building up his fitness in training following a lengthy injury lay-off but a place on the bench is the best he can realistically hope for.

Attack: Christian Pulisic made his return to action with a cameo run out off the bench against Spurs after returning to full fitness so the American winger could start tomorrow night.

Lampard has suggested that Callum Hudson-Odoi will get a chance to impress against Sevilla after not being included in the Chelsea matchday squad on Sunday. Therefore, the 20-year-old could come in for Hakim Ziyech to start on the right flank.

Tammy Abraham is expected to make way and although Olivier Giroud is pushing for a recall, we think Timo Werner may lead the line up front for the Blues on Wednesday night. 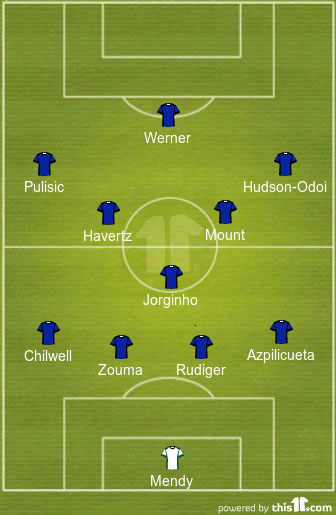