Chelsea take on Krasnodar in the Champions League on Tuesday night. The Blues have already qualified for the knockout rounds so Frank Lampard will make changes tomorrow.

Here is the team we expect Lampard to select for the game:

Goalkeeper: Edouard Mendy will be rested for the game as Lampard has confirmed Kepa Arrizabalaga will get a chance to impress between the sticks.

Defence: Chelsea are expected to make wholesale changes in defence with the preferred back four all given a rest ahead of Saturday’s trip to Everton so Cesar Azpilicueta should come in for Reece James at right-back.

Centre-backs Andreas Christensen and Antonio Rudiger are also expected to be recalled in place of Thiago Silva and Kurt Zouma while Emerson Palmeiri should get another run out at left-back with Ben Chilwell rested.

Midfield: Lampard is set to freshen things up in midfield with Jorginho pushing for a recall after being named on the bench for the win over Leeds at the weekend. The Italian could replace N’Golo Kante while Mateo Kovacic is expected to come-in for Mason Mount.

Billy Gilmour is available again after recovering from a long-term injury and Lampard has confirmed the 19-year-old will get a start on Tuesday night as he looks to build up his match fitness.

Attack: Chelsea have injury problems in attack as Hakim Ziyech has been ruled out for a couple of weeks with a hamstring injury that he sustained at the weekend while Callum Hudson-Odoi will also miss the game tomorrow with a thigh problem.

Therefore, Kai Havertz could be asked to play a wider role as he’s more than capable of playing on the wing while Cristian Pulisic should be recalled to start after being named on the bench against Leeds.

Tammy Abraham is expected to get a recall up front with Olivier Giroud dropping out after scoring five goals in his last two games while Timo Werner should also be given a breather. 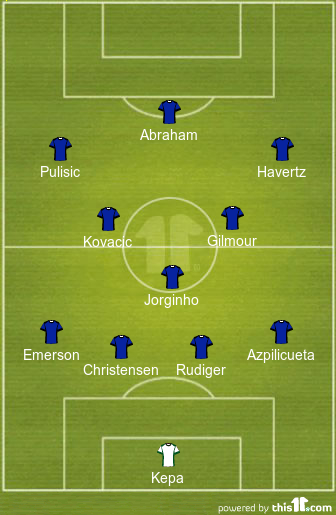