The draw for the last-16 of the Champions League has been conducted today with Liverpool, Manchester City and Chelsea all discovering their fate.

Liverpool eased into the knockout stages of the competition after topping Group D with 13 points from their six games. A 1-1 draw at Midtjylland last week meant Liverpool finished two points ahead of Atalanta with third-placed Ajax having to make-do with a place in the Europa League.

Jurgen Klopp’s side have now been drawn to face RB Leipzig in the last-16. Leipzig beat Manchester United 3-2 last week to finish second in Group H behind PSG so they are a dangerous side who should give Liverpool a stern test over two legs.

Manchester City also finished top after making light work of their group. The Citizens took 16 points from a possible 18 to finish three points clear of Porto at the top of Group C and Pep Guardiola’s men will now face-off against Borussia Mönchengladbach in the knockout stages. Gladbach finished second in Group B behind Real Madrid but City should be confident of beating them over two legs.

Chelsea were the third Premier League team to finish top of their group as the Blues just edged out Sevilla by one point to sit top of Group E after winning four and drawing two of their qualification games.

Frank Lampard will now have to pit his wits against Diego Simeone as Chelsea have been draw to face Atletico Madrid in the first knockout round. It will be a difficult task for Chelsea and Diego Costa will face a return to Stamford Bridge to face his former side.

The ties will be played in February and March 2021. Here is the full draw: 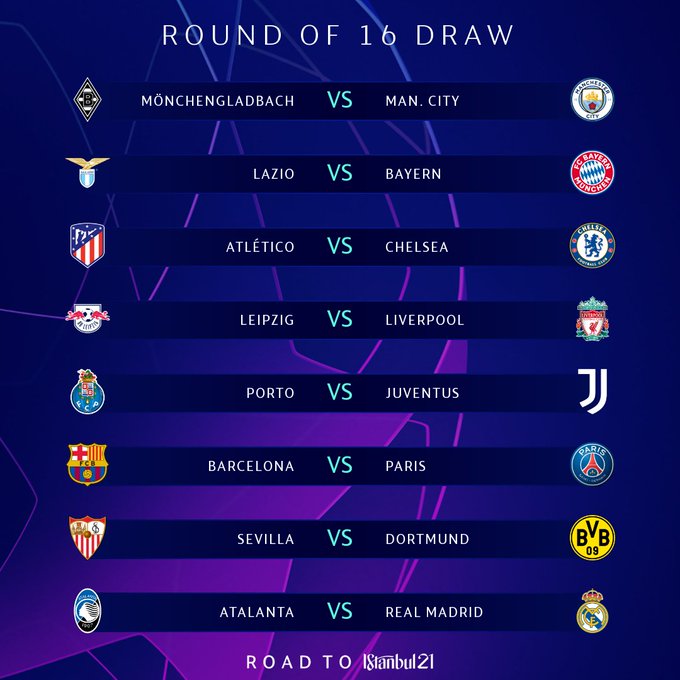