Chelsea take on Wolves at Molineux on Tuesday night. Here is the team we expect Frank Lampard to select for the game:

Goalkeeper: Edouard Mendy will keep his place between the sticks tomorrow night so Kepa Arrizabalaga will have to make-do with a place on the bench.

Defence: Chelsea are unlikely to make too many changes from the side that narrowly lost 1-0 at Everton on Saturday and we expect the same back four to be selected by Lampard against Wolves.

Cesar Azpilicueta is perhaps the closest to getting a recall but Reece James could keep his place at right-back with Ben Chilwell almost certain to start once again on the opposite side of the back four.

Thiago Silva and Kurt Zouma are Lampard’s first choice pairing and are likely to start together for this tricky away game so Antonio Rudiger and Andreas Christensen will have to battle for a place on the Chelsea bench.

Midfield: Lampard has options to freshen things up in midfield with Jorginho and Billy Gilmour pushing for recalls, however, I think the Chelsea boss will resist the temptation to change things in the middle of the park.

Therefore, N’Golo Kante should once again start in front of the back four while Mateo Kovacic could keep his place alongside the Frenchman. Mason Mount has been one of Chelsea’s most consistent performers this season so he is likely to retain his place tomorrow night.

Attack: The one area Chelsea are likely to make changes is in attack after they drew a blank against Everton at the weekend. Tammy Abraham is pushing for a recall and could replace Olivier Giroud up front.

Christian Pulisic missed the trip to Goodison Park on Saturday with a minor hamstring injury but he’s back in contention so the United States international could start against Wolves at Molineux.

Callum Hudson-Odoi remains out with a muscle injury and Hakim Ziyech also still on the sidelines with a hamstring problem so Timo Werner is expected to join Pulisic and Abraham in the front three. 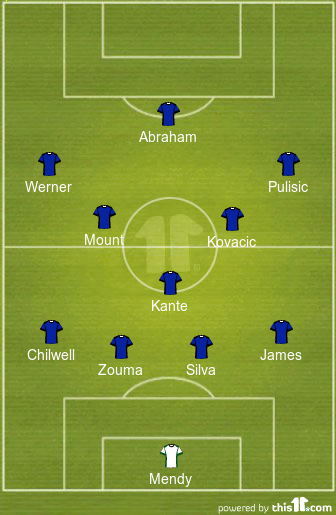